SPOILERS FOR THE SECOND BOOK... and Anyone Remember Units Clothing?

I always keep a notebook on my nightstand. Some of the best ideas seem to present themselves in the middle of the night, and the theory is that if I have a notebook handy, I don't have to fully wake up and turn on my computer.

Lately, however, my ideas have not been coming in the middle of the night, so my notebook remained empty. Or so I thought. The other day I grabbed the notebook to write something down, and found that I had four pages filled. In my handwriting. Creepy.

Then it hit me! What if the inspiration fairy wanted me to find these pages, and incorporate them in my next book. It's fate!

So, below, I present my brilliant middle of the night ideas for my next book... the sequel to ECHO. They are presented in their original form. I will translate in case you can't read my handwriting, and then at the bottom, I will attempt to put these stellar ideas into story form. 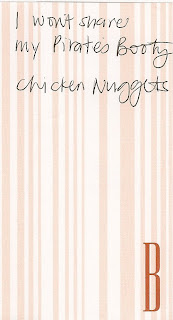 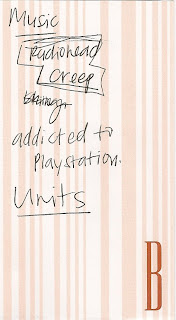 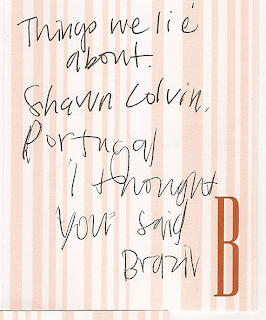 "Things we lie about. Shawn Colvin. Portugal. I thought you said Brazil."

(*Note* I had to cut this one in half, because apparently, in the middle of the night, I can swear like a sailor.) 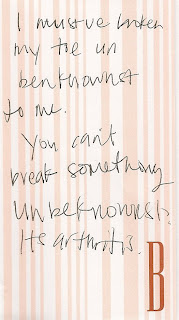 "I must've broken my toe, unbeknownst to me. You can't break something unbeknownst? It's arthritis."

So, I'm thinking, if I'm reading my notes correctly, this story is about an arthritic girl (of course) whose special power is the ability to break her own bones, without her knowledge.

We know our heroine has some good taste (Radiohead's Creep) but she also has a nostalgic soft spot for UNITS clothing, so no fashion sense. (UNITS was a deplorable clothing line from the late eighties. If you haven't heard of it, look it up. Hilarious. Apparently, I even dream about that decade).

Geography is not her strong point, as she cannot tell the difference between Portugal and Brazil. She is also a compulsive liar.

I have no idea what Shawn Colvin has to do with any of this.

Story Climax: If you steal her Pirate's Booty, or her Chicken Nuggets, she will unleash a torrent of swear words, so appalling, so shocking, just hearing them will break your own bones. And trust me, the breakage will be very beknownst to you!

What do you think? Editors, publishers, please line up in an orderly fashion. You know who my agent is. (Sensei Ted). The bidding war will be conducted by him.

I'm not sure what scares me more. The truly crappy ideas that hit me in the middle of the night, or the fact that I've reached a point where I can write them down without waking up at all.

The sad part is, what if they were originally really good ideas, but they got lost in translation?
Posted by Brodi Ashton at 8:30 AM