Dad. Our hearts are broken. 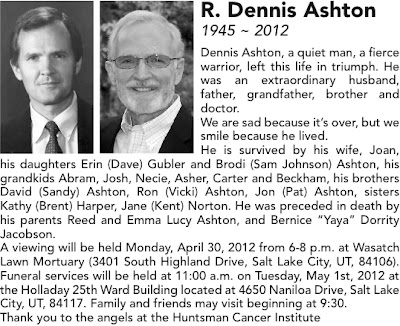 My Chicago Recap and the One Author I totally Fangirled on!

Tours are fun, but there's something so great about being home.


And then Sam doesn't say anything, but he speaks with his eyes, and they say, "I've never been more in love with you than I am at this moment."


Speaking of love, I fell in love with a city. Chicago.


Did you know they have a HERSHEY'S store? And guess what's across the street: 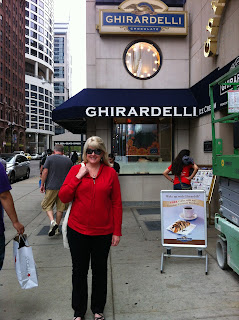 They have this stretch of Michigan Avenue called the Magnificent Mile. But I kept calling it the Miracle Mile, much to our cab driver's amusement. I could tell he was amused not because he laughed, but because he kept clicking "up" on the fare meter.


At one point, the skies opened up and a torrential downpour started, so we ducked into THE PURPLE PIG and ate at a communal table with seven strangers, stuck there to order food, eat the food, and find out what happens when people stop being polite... and start getting real.


Here's a pic of me before the storm:
After the storm, and the Purple Pig, we went to the Navy Pier, where all of the stores were boarded up, and there were no people left.
Saturday was the big Teen Day Festival.


Here I am signing books in YA Alley: 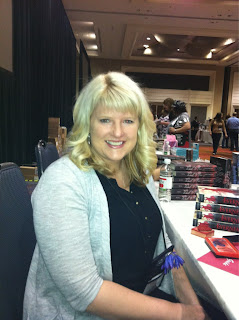 The signing was alphabetical, so I got to sit between Jennifer L. Armentrout (Pure, Half-Blood, Obsidian)... 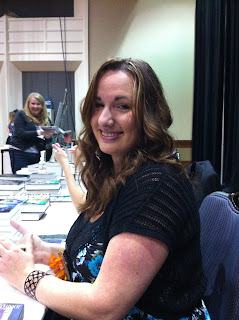 ... and Jennifer Barnes (Raised by Wolves, Every Other Day) 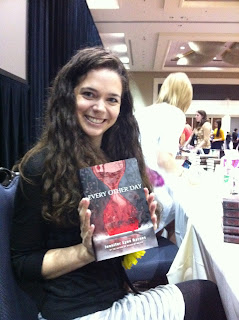 Afterward I got to read a scene from EVERNEATH: 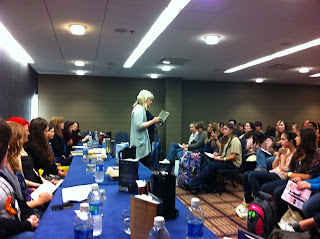 And I wish you could see the other authors at the table better. They included: Cynthia Hand (Unearthly series) Stephanie Perkins (Anna and the French Kiss) Amy Plum (Die for Me) Veronica Roth (Divergent) and many others I can't remember off the top of my head.


And for the BIG FINALE: Guess who I got to meet at the end? And yes, I totally fangirled all over her...

Yep. I met THE Francine Pascal! 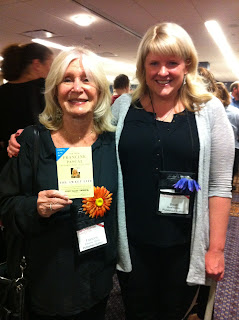 I can't tell you how many of her Sweet Valley High books I read in elementary school. 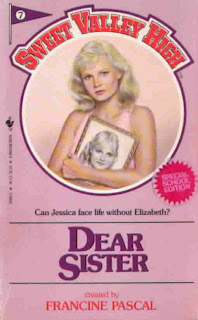 When the studious twin, Elizabeth, gets in that car accident, wakes from a coma, only to start acting like her free-wheeling twin Jessica? They had to whack her up the side of the head to knock her sense back in, and then she returned to being the responsible twin and all was right with the universe again?


So, now I get a couple of weeks home, and then I'm heading off again, but to Las Vegas and to San Diego!


I'll be in Vegas on May 3rd, signing books at the Barnes and Noble on Rainbow Blvd.


So, if you live near these places, come and see me! I'm giving away Dead Elvis guitar pick necklaces to anyone who gets their book signed. :)


Okay, that is the report so far. How are all y'all? Anyone going to the Las Vegas or San Diego event? Anyone remember Sweet Valley High like I do?
Posted by Brodi Ashton at 2:16 PM 18 comments:

First Pics at the RT Convention. And yes, they are of a Hot Man


Today's post will be short, because I am currently in Chicago at the Romantic Times Convention, and I'm hanging out with this guy: 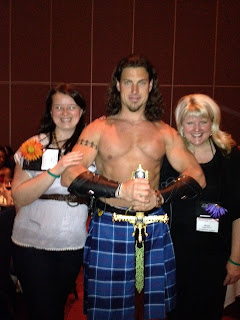 And it takes a lot of time to hang out with this guy, because sometimes we laugh... 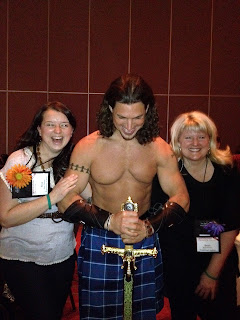 And sometimes I'm stuck with the job of lovingly fondling his arm... 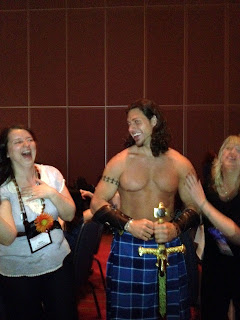 Can't wait to blog all about it. I'll be in Chicago until Monday and then I'm heading off to Jackson, Mississippi. Hope to see some of you there!
Posted by Brodi Ashton at 7:23 AM 4 comments:

So, I woke up this morning with the urge to exercise. Well, I wouldn't really call it an "urge", because that suggests it's something I wanted to do, which was not the case. Maybe I should've called it what it really was: guilt. At eating ALL THE CHOCOLATE.

I decided the bike was the way to go. Here was my biking routine, for those of you who also need to counteract those extra Easter calories.


Step 2: Check emails, on the off chance there's something that somebody in New York or L.A. needs me to do immediately.


Step 4: Locate clean socks, two sets of sports bras (for that one stretch of that one street that is in desperate need of repaving), clean shirt, etc.


Unfortunately, Sam just did the laundry, so there was no problem locating all of these items.


Step 5: Check the weather. Guess what? It's warm! Which is great, only  I usually wear a jacket when I bike, and my phone fits nicely in the pocket. Without a jacket, how am I supposed to bring my music?


Step 6: iPod Nano! That's how. Now where did I put the darn thing?


Step 7: Oh yeah, it's still in the box. I never took it out after I swore to Sam I needed an iPod nano, and I would use it faithfully.


Step 8: Take iPod nano out of the box. Hook it up to computer. Download favorite playlists.


Step 13: Open the door. But wait. Is that buzzing sound your phone ringing?


Step 14: Why yes, yes it is. And it's Bree Despain. She's in your neighborhood, and she wants to go to lunch. Because, yes, with all these steps, it's already time for lunch.


Step 15: Hang phone up. Catch an accusatory stare from your husband. He's all, "Who was that?"


I don't know why I've never tried it this way before.
Posted by Brodi Ashton at 1:50 PM 16 comments:

Announcing... the title of the Sequel to Everneath

And, the title of EVERNEATH 2: It's EVERNEATH-ier is...


Last night, I had a Twitter guessing game going, and the SECOND guess to come in was:


Wow, Alli. Have you been reading my mind? Seriously, I was like, Is it that obvious?


Anyway, I love the title for several reasons:


2. EVERBOUND sounds like a real word... one that I won't have to spell out every time I say it. (No, I didn't get tired of doing that with EVERNEATH, why do you ask?)


3. "BOUND" has different meanings, two of which really apply to the book. I like them.


So, yon bloggerville, how do you like the title?
Posted by Brodi Ashton at 8:54 AM 57 comments:

A Visit from the Snarky Question-Maker

Hey y'all.
So, the Scavenger Hunt ended. The winners of all the mini-contests are posted here so you don't have to check every single contest you entered.
Phew. I'm exhausted.
On to the post:
Ever since EVERNEATH came out in January, I've been getting a lot of the same questions.
So, here I will attempt to answer them all by employing my good friend, the long lost Question-Maker. As usual, I sent a telegram addressed to that space between the rainbows and dreams, at the corner of mirage and hallucination, on the elevator level of dashed hopes, to summon the QM out of his deep sleep.
QM (stretching and cricking his neck): Whaddup, yo?
me: QM, did you get all street in my absence?
QM: Oh. It's you. (rolls eyes) Okay, lemme have a looksy here... And voila! For the first, and most popular, question from your readers: The ending of EVERNEATH made me want to gouge my eyes out-
me (interrupting): They don't say that!
QM: Oh. Right. It says here, they were thinking it, though. Anywho, continuing on, since the ending was so...
me: (gives him the evil eye)
QM: ... um... intriguing, will there be a sequel?
me: Yes! For some reason, this information is not readily available to many readers, and I get a ton of emails asking if there will be another installment. So this is your official alert: There will be two more books in the series. The second one will be out January 2013, and the third January 2014.
QM (with an eyebrow raised): So, you're going to subject your readers to more?
me: Well, I think subject isn't the right word. How about treat?
QM: How about inflict?
me: How about gift?
QM: How about you shove that thesaurus--
me: Stop! We're a family blog. Moving on...
QM: Okeydoke. Question number 2 on everyone's minds: How are the sales of book one going?
me: I really don't know.
QM: Shut the front door.
me: I'm serious. I prefer it that way. My agent assured me that my publishers are happy with how the book is performing, and that's all I care about. Numbers don't really mean anything to me, because I don't have anything to compare them to. Besides, I'll go crazy if I look at numbers every day.
QM: But don't you get paid based on those numbers?
me: No. At least, not really. Right now, I've already been paid with an advance from my publisher, and I won't be paid anything additionally unless I "earn out", which means I've sold enough copies to cover my advance. (Believe it or not, I get asked these questions A LOT).
QM: yawn Sorry. Did you say something?
me: How about another question.
QM: Okay. Do you have a title and cover for book 2?
me: I have a title and a first draft of a cover (It's gorgeous) but neither of these things has been released. The title will be announced soon, and the cover will probably be revealed sometime in June.
QM: So, if the cover is beautiful, I'm assuming you had nothing to do with it.
me: Rude! True, but rude. I don't really have any influence over the cover. But I do get to see early versions and squeal because I love them.
QM: Please warn me when you are about to squeal. Fingernails on chalkboards come to mind.
me: Okay, that's about enough of the snarky QM. I hope this answered some of your questions. But if you have anymore, feel free to ask me in the comments! Ask me anything! Except how much my advance was...
Posted by Brodi Ashton at 12:00 PM 19 comments: