The Great Flood of 2010... aka How I went Boating in my Basement

Hey y'all.
It's the Monday after the Great Flood of 1-0.
That doesn't sound right. How about "The Great Flood of Ten".
Nope. The Great Flood of Oh-Ten.
Forget it. I can't even get lucky on the name of the flood. Yes, welcome to the pity party.
So, it's 1:00 a.m. on Friday morning, and I hear something that sounds like a waterfall. Since we don't have one of those "Nature Sounds" machines, I know this is gonna suck.
We race downstairs to find this: 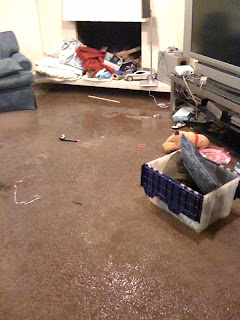 This picture does not begin to capture the scope of the disaster.
A sprinkler pipe burst just outside the window, and the entire window well was filled with water. It was spraying through the bottom of the window at this point, cascading down the wall to where it splashed playfully into the lagoon at the bottom. 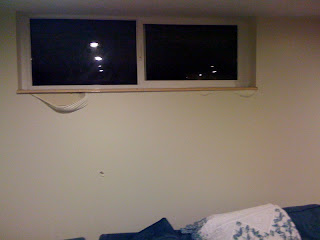 (Apparently we were fortunate the window didn't shatter. Lucky us.)
I love what disasters reveal to us about our personalities. Sam was freaking out, because he hates water. Literally, he's had this exact nightmare for years, so for him, it was as if his worst nightmare had come to life. Here's a depiction of him. 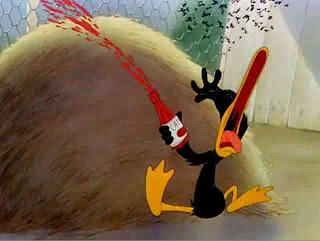 (Sam. Every time he freaks out, he grabs a bottle of ketchup and starts shaking it)
Thankfully, in my worst nightmares, I've been shot in the head, probed by aliens, kidnapped, beaten, and the best one: I imploded due to implementing the wrong technique when popping a giant zit. Never dreamed about floods.
Sam was running around shouting expletives, so I guess it was my turn to be the voice of reason. I tried to think of words of wisdom, but the only thing that came out of my mouth was: "Get busy livin', or get busy dyin'!"
It worked. Because Stephen King knows his stuff.
Once Sam was able to speak to me using words that didn't start with F and end in CK (Frederick), I ducked outside, took out my cell phone, and called my mom. (She was in Cedar City. Strangely, she was asleep.) I don't know what I was expecting her to do about it, but I'm really not used to being the lame-a** "Voice of Reason" and so I had to talk to an actual voice of reason. (I just play one on tv).
Thankfully, we know a kick-butt disaster guy, who showed up on our porch the next morning with one of these beauties: 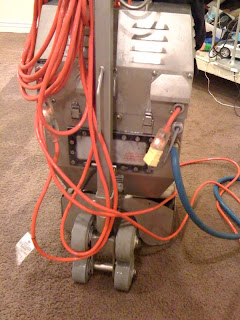 Attached to the machine was this guy: 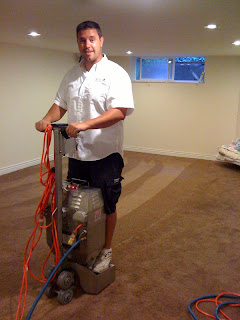 (Jud Hanks. Superman owner of Nautica Cleaning)
He would've been here earlier, but he had to drive that thing all the way from West Jordan. (It's okay. It's street legal.)
After spending the night baling out water, I figured Jud and Sam had things under control. So I packed my bags, grabbed Kid C, and headed down to the Shakespeare Festival in Cedar City, to get my fix of men in tights. 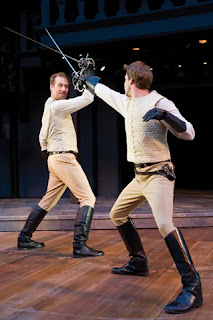 And left Sam to deal with this: 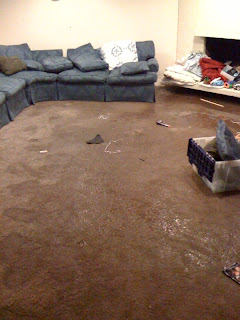 Really, I think we were both exactly where we each wanted to be.
How was all y'all's weekend? Any disasters?

*Added: Keep this Saturday free (the 21st) for the annual Writing for Charity event. Great chance to meet authors, and hobnob with fellow writers. And it's for a good cause. And reasonably priced! Click here for more info
Posted by Brodi Ashton at 10:14 AM