Okay, so here's the lone picture I have of the conference... 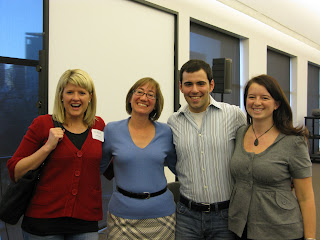 The hungry giant on the far left is me. But I could have sworn the photographer never said 'smile'. Instead, I'm pretty sure she said "Okay, now act like you would like to eat the camera..." click.

I could probably fill a year's worth of blogs with my gaffs from just this one weekend. So I thought it would be fun to compare my verbal vomit with Ted's cool quippiness.

Quips vs. Gaffs
1. Conference go-er during Q&A: "Ted, I have a really dumb agent question."
Ted (with a smile): "You mean a dumb question for an agent, or a question for a dumb agent?" (total quip)
Audience: appreciative laughter

3. I would have documented his quips at the party on Friday night, but unfortunately Bree and I ended up at the WRONG PARTY. We took advantage of the free bar and the incredible spread of sushi for 45 minutes before we realized that all the party goers were way too well-dressed to be children's writers. (Not that children's writers don't dress well, but these people were all about the evening gowns and the carry-on pooches in their purses.)

So, I guess that was another gaff...

1. It's a very good thing New York Ted is in charge of selling my book.

2. Test the words out in your head before you let them spill out of your mouth.

3. If someone is pointing a camera your way, just smile. Do you really need instructions on this?

Off to do revisions. Please include your own verbal gaffs in the comments, so I don't feel completely alone on this...
Posted by Brodi Ashton at 8:20 AM