Why I Hate Halloween... And the Art of Yoda

It's November. Thank Heavens.
So, a lot of you know my dad is battling Pancreatic Cancer. (Yeah, it's the really crappy kind. Like if Lord of the Rings was about Cancer, Pancreatic would be Sauron. Or Saruman. Which one is the big red burning eye?) 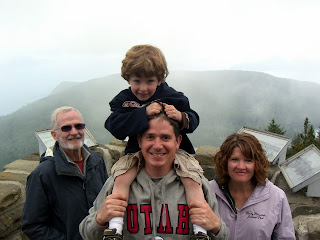 (My Dad's on the left)
Anywho, he was diagnosed exactly 3 years ago on Halloween. Yeah, that Halloween really sucked. We found out after we'd already dressed up in our costumes, so I remember that year as a bunch of people in costumes, sitting on my sister's porch, balling our guts out. Even the clown was crying.
My Dad is currently beating the disease, but every few months the doctors test his blood for signs of recurrence. Last Halloween, we had a scare. Again, it was the costumes and the crying. This Halloween, we had another scare. And again, the costumes and the crying.
Halloween has become this day where we're dressing our kids up as ghosts and ghouls, all the while crying about the really scary things in life.
Thankfully, we just found out his tumor marker went back down again. I don't know what it is about Halloween that makes his blood go all wonky, but it's getting to the point where I just want to skip October completely.
Since that's not possible, here are some pics from our Halloween. Really, we were mostly happy! 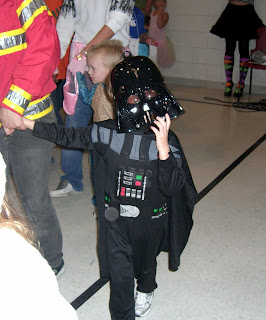 Who knew Darth Vader could look so harmless? 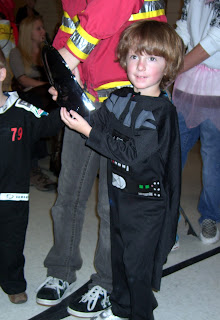 Yep. It's Kid B behind the mask. And let me tell you, there's nothing more fun than a Halloween Parade at a school where most of the kids don't like things touching their skin... 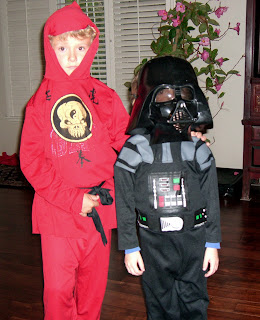 The formidable duo of Kid C and Kid B. Tell me that wouldn't scare you to open your door to find these two on your front porch, demanding candy. 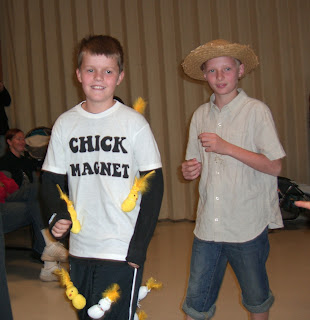 This is my nephew A on the right and his friend F. I had to take this pic because Kid C kept trying to describe F's costume:
Kid C: "He's a chicken. With magnets."
me: "What?"
Kid C (exasperated): "A Chicken! He's a magnetic Chicken!!"
So, when I finally saw the costume, it all made sense. 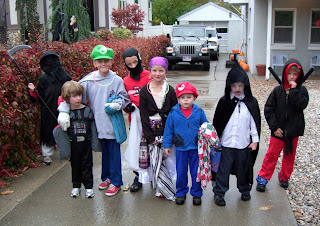 The trick-or-treating gang. My favorite is the Grim Reaper, standing off to the side, contemplating the best way to decapitate the group with one swing of his scythe.
It also reminds me of a joke: "Okay, so Mario, Luigi, Darth Vader, a couple of ninjas and the Grim Reaper all walk into a bar..." 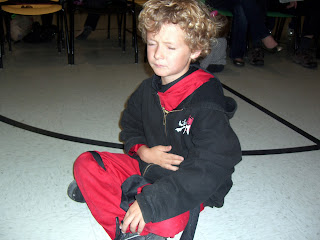 While we were waiting for Kid B's parade to start, Kid C sat in the middle of the floor, breathing in an out loudly through his nose.
He said he was doing Yoda to calm himself.
His teacher's from India, and she teaches them the Yoda from her home country.
How was all y'all's Halloween? Do you have the same traditions as we do? i.e., Do you sit around on a random porch, all dressed up and balling your guts out?
Posted by Brodi Ashton at 9:03 AM