My California Adventure: including Kid B's pigeon impersonation and the scariest gang at Muscle Beach

Hey y'all! I'm back. Sorry for the blog silence on Friday. We decided to make the drive from Dana Point, CA to Salt Lake City in one day, and it was 11 hours in the car. 700 miles. 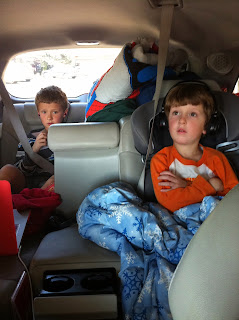 Yep, that's kid C watching a movie on the computer and Kid B watching the car's dvd. Because apparently the earth would stop rotating if the two of them actually agreed on a movie. What do people do with three kids?
Anywho, it's time for a...
RUNDOWN OF THE TRIP! (Dun Dun DUN) *cue timpani drums*
Grab your snacks now, because this is gonna be long.
We... played at the beach.
Kid B preferred one degree of separation between him and the water. He would put a sand dolphin on the beach, and then patiently wait for the water to wash it away.
Every once in a while, the water took the challenge.
My nephews Josh and 4-year-old Asher played smashball. It only took them two hour to smash their record. Which was one in a row.
We also invaded the famed Muscle Beach at Venice Beach. The reason why the gym is empty in the pic is because this pack of hoodlums threw down the gauntlet and the girlie men ran away. Actually we just told them there was a sale on "Juice" down the block. We meant orange juice.
We also fed the birds. Because everyone knows the pigeon population is endangered.
Venice beach also had the nerve to charge 20 bucks for these Luigi and Yoshi backpacks. Good thing we're not suckers.
Next up was the happiest place on earth: The Lines at Disneyland!
At one point, we told Kid B he was in charge of crowd control. He actually believes he's leading these people.
Speaking of Fastpasses, I rocked them. Seriously. Check out this stack.
How do I get so many passes at once? It's all in the wrist.
I know it's called Splash Mountain, but why do we have to get so wet?
I was soaked after this ride, and all I could think about was how many places that water had been. And how many people it had touched before me.
Okay, this post is getting too long. I'll leave you with this hangman board from our game with Kid C. The clues we gave were:
1. Villain
2. Star Wars
3. The villain from Star Wars. 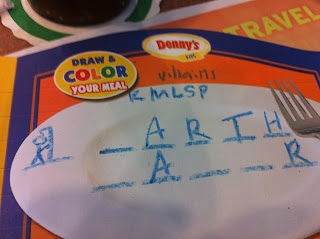 Kid C never got it. Anyone out there have any guesses?

This week I'm going to the world's best writing conference WIFYR. Pronounced Why-Fer. Hope to see some of you there!
Posted by Brodi Ashton at 9:24 AM