My First Autograph... and a Day at the Mosque 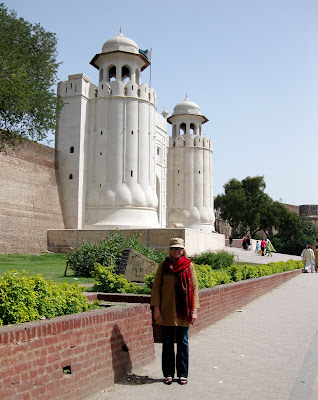 Yesterday we went to the Badshahi Mosque and the Lahore Fort. These were the places I was most anticipating, and also the places I most wanted to fit in.

We started off at the Lahore Fort- a palace of sorts built when the Islamic Republic of Pakistan used to be a kingdom.

As you can see, I dressed the part. I wore a traditional shirt and shawl. But that did nothing to hide my complete American-ness. 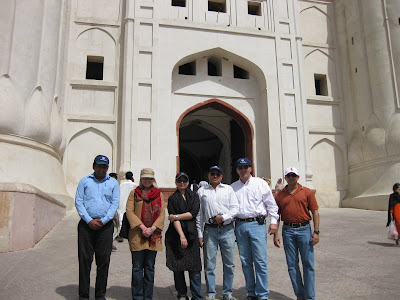 (Olfat: our driver, me, Amra, Ahmed, Umer, and the Major: our Security)

Our entourage didn't make us any less conspicuous, considering most of them dressed in traditional western garb. In fact, besides my good friend Amra, I was the only one trying to look like a Pakistani. And failing miserably.

Shortly after we began our tour, we noticed the extreme attention our little group was receiving. The expressions ranged from curious to friendly to downright excited.

People began to follow our little group along on the tour, waving and smiling as we went. It even got to the point where some of the more adventurous spectators approached our escorts, asking if they could take a picture with us. 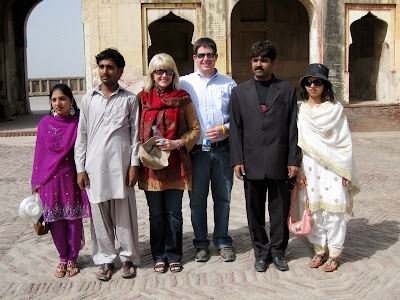 The climax was this darling Pakistani girl who came up to me with a notebook and pen, and shyly asked for my autograph. I didn't have the heart to tell her it wasn't worth anything! 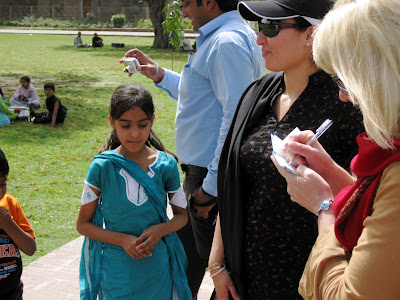 Our next stop was the Badshahi Mosque- the fourth largest behind Mecca, Faisal (in Islamabad) and another one (I'm trying to remember). 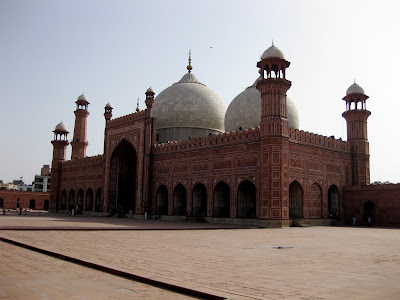 Once within its walls, the women are asked to cover their heads as a sign of respect, and everyone must take their shoes off. (Which made walking on the red stone in 100 degree temps a little difficult). 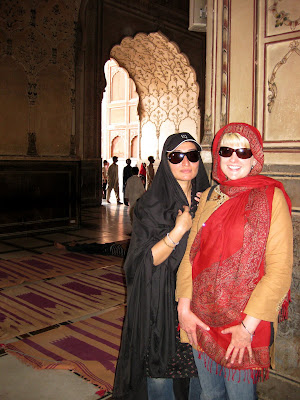 Amra and me in the Mosque 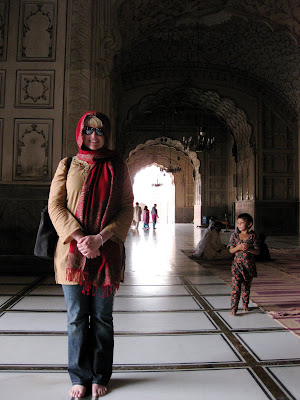 This cute little girl had been following me, staring wide-eyed at my hair.
At one point, I wasn't paying attention, and one of our guides told me to go stand in the corner and face the wall. I assumed this is what the muslim women were supposed to do in this particular room, so I quickly obeyed. (Not wanting to offend). I thought this was very strange, because I know a tiny bit about the Islamic religion, and I couldn't remember any part where the women are forced to stand in a corner, facing the wall. 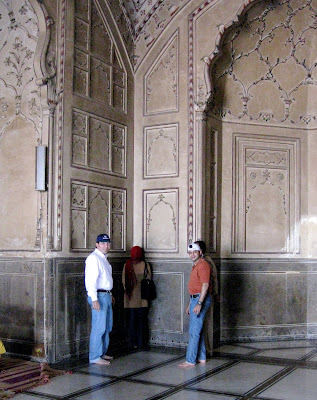 A couple moments later, I could hear a voice coming to me from above. No, it was not a prophet. It was my friend Amra, who was standing in the opposite corner. I finally realized it was an Echo chamber, and that's why they made me stand in the corner- so Amra and I could hear each other talk. Yeah, I felt very Christian at that moment.

Since it's one a.m., I'll leave you with these pictures and blog more later. I find this country fascinating and the people kind and inviting. 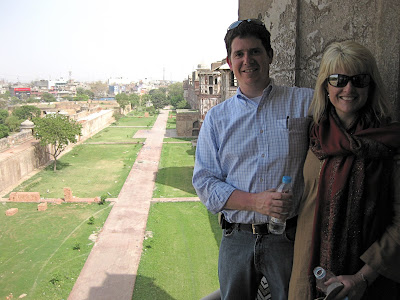