Writing for Charity Event Recap: Who knew it could be so funny?

On schedule for this week:

a. My quest to go from "so-not-hot" to "Hott!" begins. Both my boys are in school, and I am determined to lose the flab and earn that extra "t" and exclamation point. Or maybe I'll just sit at my computer and type. Okay, yeah, let's do that.

b. The U.S. Open begins today, and you know what that means... Rafa coverage. No complaints!

The Writing for Charity event at the Children's Treehouse Museum was a huge success. Filled to capacity. Which was great, until I almost didn't get a spot. I finally had to wave my fifty bucks in the air, shouting, "Why won't you let me give money to the children? Why?!"

For some reason, a spot opened up. 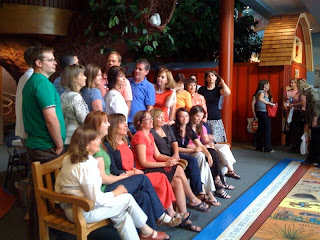 Main Obversations
1. You guys should get to know Matt Kirby. Not only does he have a huge book coming out in 2010 (The Clockwork Three) he also spontaneously dances upon request.

Case in point: I was telling Matt about a woman at the SCBWI Conference who tried to pick up on me at the Blue Moon Ball. At the ball, I had been demonstrating some totally hott! dance moves from the early 90's (Ants in the Pants and the Roger Rabbit) when this woman, obviously impressed, made her move.

me: "It's hard to explain with words. Here, stand here. [Keep in mind, we are surrounded by mingling authors in the Children's Treehouse Museum] Perfect. Now, start dancing!"

Matt immediately starts stepping side to side, moving to some inaudible soundtrack in his head. I burst out laughing.

Once I compose myself, I say, "That's good, but your arms are folded. Do it again, and this time get your arms in it."

He did! I never really got the whole story of "The Pick Up" out, but I got to see Matt Kirby dance. So if you happen to meet him, ask him to dance. He will! 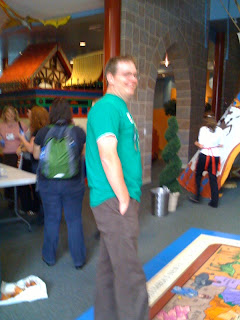 The photo is a little blurry, because his moves were lightning quick. And because I was laughing.

2. I got to sit next to Brandon Mull, bestselling author of the Fablehaven books, at lunch.

I've never met Brandon before, and I wanted him to sign my first page, so I mentioned it to Emily Wing Smith and she made it happen. (Because my own mouth goes numb when I meet famous authors for the first time. Thereafter, though, my mouth doesn't stop spewing forth word vomit, right James?)

I was so nervous sitting next to him, that I drew all over my white shirt, with blue pen. 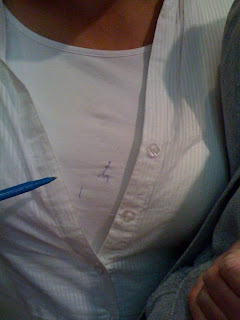 Yes, I did just post a picture of my chest.

I know one is expected to converse at lunch, but the only topic I could think about was the writing on my chest, and I didn't want Brandon to remember me as the weird chick who kept asking him to look at her chest.

But I had nothing else to say. By this time, James Dashner was calling out across the table to me, something like, "Admit it, Brodi. You didn't know what a 'docent' was, either." (Because James is just random that way).

Since my mouth wasn't working, I tried to give James a look that said, "Of course I know what a docent is!" But I couldn't figure out how to say the "docent" part with just my eyes. So, finally I managed, "Derh. I know what it is."

He thought I was lying. 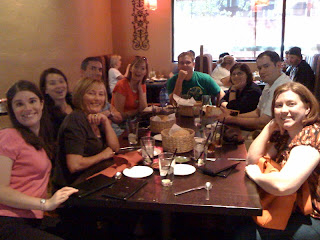 Other Strange Occurrances at the Event:

*Shannon Hale said most authors, no matter how successful, don't ever feel like they've "made it."

*When asked why she became an author, Jessica Day George said it was either that or become a museum docent.

*I saw Leisha Maw and Amy Reall, my peeps from the BYU conference.

*I refrained from asking Brandon Mull to sign my chest.

*I accidentally printed up my first page on cardstock. Like I thought it was so important, it warranted heavy paper. I had the authors sign it so it looked like I did it on purpose. * When asked why he writes for kids, Mike Knudsen said, "I write my best, and it comes out at a 4th grade level."

*I almost didn't get in because the desk attendant said I was four minutes late.

*Best advice from Ann Dee Ellis: focus on the writing, above all. The rest will fall into place.

*I got to read Taylor Maw's first page in his book about aliens. (favorite line: "Space Sucks.")

*After reading my first page, Jessica Day George said she would want to keep reading. Yay.

*The tortilla chips were as big as Bree Despain's head. (But I will add she has an inordinately small head.) 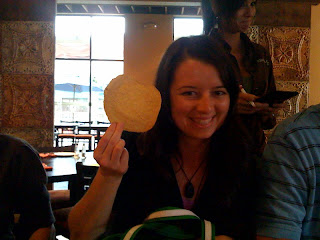 *Shannon Hale said Brandon Mull could come to the event, as long as he brought the dimple in his chin. 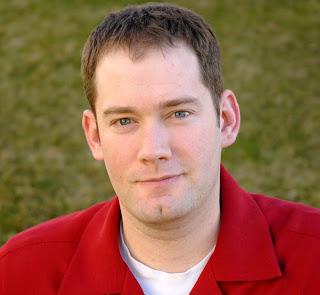 *I lied to James Dashner. I really have no idea what a docent is.
Posted by Brodi Ashton at 7:06 AM