I am currently in Colorado, resting comfortably at 8,700 feet elevation.

The above sentence could also be typed this way:

After 8 interminable hours on a winding road upward - during which carsick Kid-B puked from Heavens all the way to Mergatroid - we arrived somewhere near outer space, where the air is not only thin, it's dangerously anorexic, and when you have asthma, and you're just getting over a cold, elevation is about as pleasant as a knee to the groin. 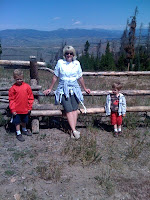 Kid C, me (suffocating to death) and Kid B

But Colorado is beautiful this time of year. Sort of like Utah. Only further away.

I jest. I'm really having fun. I have Wine-Frye. (Wi-Fi, to those of you new to the blog). The master bedroom doesn't have a king-size bed, but that's only because it has to make room for the hot tub.

What's that you say? Silly Brodi, she means a Jacuzzi, or a rather large bathtub. Because no normal-sized condo has a hot tub inside the bedroom.

No, no. You heard me right. I mean a full-sized, special sturdy deck, bad prom date, hot tub. 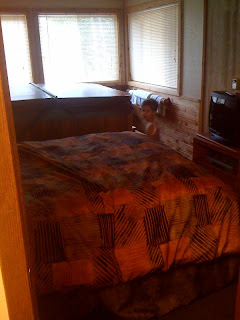 It has the effect of making our bedroom feel sorta like an indoor swimming pool. At one point, during the night, I tried to "turn it off" and succeeded only in firing up the jets at full speed.

Sam informed me one doesn't really "turn off" a hot tub.

So we are lulled to sleep by the gentle purrs of the world's largest outdoor hot tub that can still, magically, fit indoors. The three of us sleep quite comfortably together. Me, Sam and the Hot Tub. Although I have had to get after the hot tub for stealing the covers.

Leaving the Universe’s strangest ménage a trios, and continuing on with the list of stuff I learned at the SCBWIBCSIWC Conference:

6. I should really grow a pair.

If you ever want to get introduced to someone, but you are too afraid, you need a friend like Emily Wing Smith. She has mastered the art of the "sidle", where she mingles and mozies her way toward the target. Everyone who was on the receiving end of one of her "sidles" was always so darn happy to meet her.

Without her "sidle", we never would have met many of the cool people, like Richard Peck, Sherman Alexie, Jay Asher and countless others. 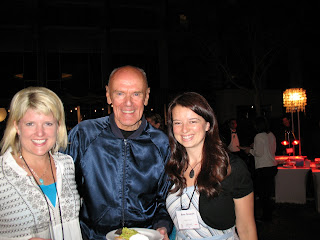 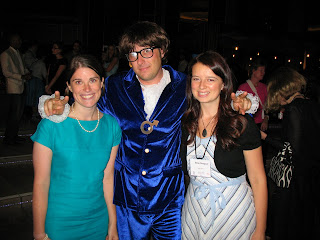 Bree and I tried to "sidle" on our own once - to a semi-famous author - and we asked if we could get a picture. He acted like we had dared him to chug a mug of cat vomit. Seriously.

The ultimate was when the hotel closed down the courtyard and film crews took over to shoot a scene from the television show “Lie to Me”.

They had bouncers at every door, and signs instructing the loser touristas to stay away.
But, you see, Emily wanted to be an extra. She’s wanted it for a long time.

So, that little sidler just walked right past all the signs, found the nearest person with headphones, and asked him where the background actors should report. 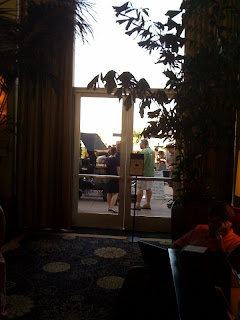 It's hard to see, but Emily's dressed all in black,
obviously past security's first line of defense.
She made it quite far, and when all else failed, she offered to get a sound guy a sandwich.

7. Black shorts are not appropriate attire for a Ball.

In the spirit of the notorious “prom pants” event, I tried to get away with wearing black shorts to the “Blue Moon Ball”.

To be fair, I had a fear of being the only one at the Ball who wasn’t asked to dance, so I wanted to wear something I felt comfortable in.

Black shorts. And even worse, no blue.

But Emily and Bree wouldn’t allow it. They said, “What if you get asked to dance the Virginia Reel, and you lack the flowing skirts?” (Okay, they didn’t really say that. I was the only one who was naïve enough to think there would be a Virginia Reel.) 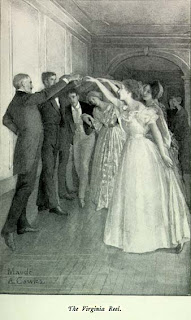 In the end, I borrowed an outfit from Emily.

Scarlett O'Hara wore black to her ball. Nobody gave her crap. And btw, when there are 800 women, and 100 men at a conference, the ball is not bound to look like this: