This one time, in New York, Rosie O'Donnell, The Jimmer and I took a plane...

Hey, bloggerland. Long time, no see!
So, I get on the plane from NYC to SLC yesterday, and guess who's sitting two rows behind me?
The Jimmer. Jimmer Fredette.
You know, this guy:
Apparently he's the best college basketball player in the nation. How do I know this? Because the guy next to me asked for his autograph, and then the guy next to him says, "Who is it?" and the original autograph-asker was all, "It's only the best college basketball player in the nation!"
After which, the guy who didn't know the Jimmer proceeded to tell the Jimmer how he was the best basketball player in his own high school, and he still held the record for some sort of statistic, and wasn't the Jimmer impressed?
The Jimmer was impressed.
Don't believe he was really on my plane? Well, I have the photographic evidence: 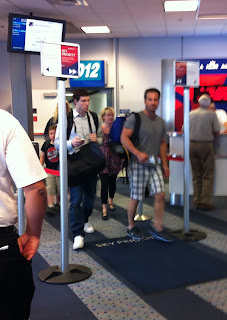 The Jimmer is The Guy on the left. Coming off my plane. I took this picture clandestinely. No one even knew I was taking a picture... except maybe the guy on the right, who is staring straight at me.
And guess who else was on the flight? Maybe the title of the post gave it away, but here she is, the lovely Rosie O'Donnell. 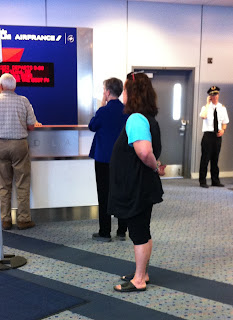 Don't believe that's Rosie? I understand. Bree Despain didn't believe me either. So a little while later, I waited for her to turn her face to me... and voila. Here she is. Doesn't she look great, even after a 5 hour flight?
Okay, so I'm planning on blogging all about the epic NYC trip, which involved a daily hunt for cupcakes, two broadway shows, blistering heat and humidity, and a tiny dog named Hogi.
But as for now, I have to pack my bags. Cuz we're leaving for SoCal. Because summer isn't summer unless you hit both coasts in a two week time span. Right?


*added: It really was Rosie O'Donnell. I just could never get a clear shot!
Posted by Brodi Ashton at 8:20 AM

Email ThisBlogThis!Share to TwitterShare to FacebookShare to Pinterest
Labels: nyc