The Saddest Banana in the World

Most of you know Kid C has been claiming he is "left-handed" ever since he had his cast taken off of his right arm. 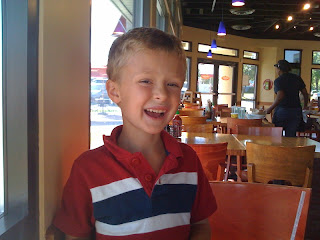 We've tried to be patient. Waited for him to figure out he is not left-handed. We don't want to push him into realizing an ugly truth: he is right-handed.
Unfortunately, however, he is in third grade and his class is deep into learning cursive.
The final breaking point was his Cursive 'B is for Banana' sheet.
Take a look. It didn't start out well.
Next came the actual word. Banana.
Teacher: "Okay, Kid C. All you have to do is copy the example. Got it?"
Kid C: "Got it!"
Teacher. "Umm... Okay. So do you notice how in cursive, the letters connect to each other in a flowing kind of way?'
Kid C: "Yes."
Teacher: "Try it again, but this time in cursive. "
Kid C: "Got it."
Teacher (grunts in frustration): "Okay, Kid C. This time, try writing the entire word without letting your pencil leave the paper."
Kid C: "But it says banana."
Teacher: "Yes, but not in cursive. Can you try it again? With your pencil stuck to the paper the entire time?"
Kid C: "You got it!"
Teacher (sighs): "Okay. Because I love pain, I'm going to ask you to try it one more time."
Kid C: "This is going to be the best banana yet."

So, yes, we are being mean parents and forcing him to change to his right hand. He is right-handed. We're not exactly being abusive or anything, are we? Because he gives me these puppy-dog eyes, and with a trembling lip, says, "But... but... I'm left-handed. I really think I'm left-handed. Please?"
I keep trying to tell him that just because we're making him write with his right hand, it doesn't mean he will actually lose his left hand. But he seems unconvinced. He goes around cradling his left hand, whispering sweet goodbyes.
Ally Condie says part of her inspiration for a few of the scenes in Matched was the fact that our nation's kids are losing the ability to write. I have no idea what she's talking about. See above. I would like the evidence entered as Exhibit B. For Banana.
Posted by Brodi Ashton at 10:47 AM