Houston, we had a problem...but things are looking better 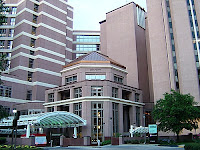 This is Sam, Brodi's lovely husband.  Brodi is down in Houston, Texas (can I get a Yeehaw? or a y'all?) with her sister and her mom.  Her dad is at MD Anderson Cancer Center.  He has been there for the past week or two getting some awesome radiation treatment.  But, he had a bad spell and some bad luck and has been in the ICU for the past week.

The good news is that he is doing much better now than he was doing earlier this week.  We are keeping prayers, fingers crossed, etc. as he enters this weekend.  The pic above are DEMANDS by Brodi, her sister and her mom for her dad.  They will accept nothing less.  And so far, he is listening to their demands - you don't mess with 3 'blonde' women who have their minds made up.   The plan now is that her dad will continue to feel better this weekend and and then get some treatment that was in the middle of before his setback, and come home next week.  It would be a very nice Christmas gift to everyone if that were to happen.

First off - there is no reason for the pic above except I put it there because it is awesome.  With Brodi gone, I am trying to make sure that I don't go insane.  For all of you single parents out there...my San Francisco baseball hat is tipped to you.  This week has been work, running kids to school, soccer practices, scouts, haircuts, birthday parties, skiing, work, trying to clean the house, homework and regular work once again.  I think I have lost my wallet or phone 19 times in the past 3 days.  Somehow I am able to find them every single time.  But I have probably wasted 7 hours looking for those stupid little things.  I have also been able to witness some great conversations between our boys, such as "Do you know that 95% of kids do not get enough whole grain?'  Kid C told this to Kid B.  Kid B gave him a look that said, 'Seriously, you think I care about that. Seriously?'

Today is also Kid C's birthday, so we had an early breakfast at McDonalds (breakfast of champions, pic on the right...if you look hard enough, you will see a load of fruits and vegetables - I think they are right under the sausage egg mcmuffin wrapper) and then a birthday party at his school.  After school, he is headed up to go skiing.  After skiing, we are going out to eat at Chuck-a-rama (his choice) or get Hot wings (my choice) and then a Utah Utes basketball game.  So, yes, we will be busy.  My birthday gift to Kid C is to teach him how to smile like a regular kid.  Hope you all have big plans for the weekend.  Brodi should be back in the blogging saddle on Monday.
Posted by Brodi Ashton at 11:03 AM