Free Book Friday: Life in the Pit by Kristen Landon... and Sam pulls a Groin

Happy Friday!
Up for grabs today is a signed copy of Kristen Landon's LIFE IN THE PIT. 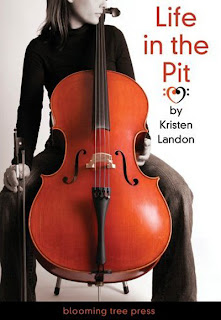 All you have to do to enter is leave a comment!
So, Sam was in a tennis tournament last weekend, and he made it to the championships. 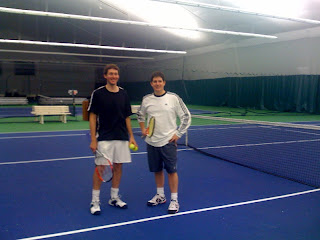 (this isn't the actual tournament, but it's the only pic I could find of him on the court.)
We were so excited, but nervous too, because during the match before the finals, he had gotten severe shin splints.
The first set went okay, but he lost it in a tie-break, and then he was way ahead in the second when he twisted his ankle.
Brave Sam kept playing. The other guy gave him a drop shot, and Sam ran forward to get it, but he suddenly stopped and then he leaned against the net for a few minutes, head down.
Those of you who know tennis, and even those of you who don't, could probably guess that's not normal. I wasn't sure which was causing the problems, the shins or the ankle, but he didn't look good.
Because this was the finals, there was a crowd watching the match, and when Sam switched sides to prepare to serve, he turned toward me, caught my eye and... um... gestured toward his nether-regions.
He gave me a look that said, "I pulled my groin." (It's hard to master the look that portrays this statement. Sam's been working on it for years. It's all in the eyebrows.)
I tried to give him a look that said, "I'm surrounded by people! Stop pointing there!" (This look involves a series of winking and blinking.)
I glanced side to side to let him know I wasn't alone. He assumed I hadn't seen his oh-so-subtle message.

He waved at me, pointed there again, and mouthed the word Ow.

I know groin injuries are nothing to be embarrassed about, and I was so not embarrassed. Not at all.

By this point, he could barely walk, but he finished the match without defaulting. After the match (he lost in another tie-breaker) I helped him off the court, and he's all, "I pulled my groin. I tried to tell you, did you see?"

I patted his back as he limped off the court. "That'll do, Pig. That'll do."


So, what do your significant others do to embarrass you? And what are y'all doing this weekend?
Posted by Brodi Ashton at 8:22 AM