Washington State by the Numbers

Oh my. It feels like I've been gone for a few years. We spent last week in Washington State with my family, my sister's family, and my parents. Our condo there had no Wi-Fi, which is a concept I simply don't understand.
Anywho, I'm crazy unpacking and recuperating right now, so here's a quick post.
Washington State by the numbers: 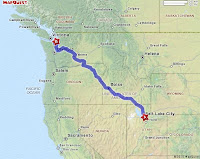 Number of times the lake monster attacked our ferry: 0. (I was rather disappointed. Whenever movies show ferries, someone gets murdered, or monsters attack.)
Number of games of "Tag, you're it" played inside the car: 4,382
Number of times we tried to explain tag inside a car was not supposed to be fun: 4,381
Number of times my mom - because of the one hour time difference - started out the day saying, "What are we going to do with our extra hour today?": 7
Number of DVD's we  bought for the trip: 8
Number of DVD's Kid B would allow to play in the car: 1 (Sonic the Hedgehog, a cheesy 80's cartoon version of the game)

Number of nights we were up singing the Sonic theme song: 7
Number of hikes: 12

Number of beaches: 6
Number of hikes to beaches: 6
Number of times Nephew A complained, "All we ever do is hike to beaches!": several
Number of times a few of the adults secretly agreed with him: several
Time on the clock when we entered the fabled Forks, Washington: 10:47 a.m.
Time on the clock when we exited the fabled Forks, Washington: 10:54 a.m. (It would've been shorter, but I had to use the bathroom)
Number of Twilight themed stores we saw, including "Jacob Black's Power Tool Rentals" (which hubby thought was not really playing for the appropriate audience, because would the people who  actually rent power tools really be impressed by a connection to Twilight?): 8
Number of days we thought we had rented the condo for: 7
Number of days we actually rented the condo for: 6
Number of minutes we had to pack on the last day: 15
Number of minutes we'd been home before Kid C said, "I'm bored": 3
Number of times I've counted the calendar days until school starts again: Countless.
I missed y'all. You have no idea how many times I checked my emails, hoping for comments, and then remembering there was nothing to comment on. It's good to be back.
I'll share pics and stories on Wednesday and Friday. How's your summer been?
Posted by Brodi Ashton at 12:23 PM