New York Shenanigans, Entry #2: The Team at Balzer and Bray, and The deliciousness of the Kentucky Hot Brown

So, we made it to number 4 on my top 38 things in New York. I don't know why it takes me forever to complete lists. FOB Jenni Elyse pointed out in the comments Monday that it took me over two years to get through the "Top 25 Things About Me" list, and even then I only made it to #17. (I think the last one was "Sometimes I talk to inanimate objects.)
Anyway, moving on.
5. I got to meet my editor, and the team at Balzer+Bray and HarperCollins.
a. Here's Kristin in her office.
Kristin is a big deal. You can tell because she has a window, and I learned that windows in New York City are prime real estate. Windows are like gold. They are currency. As in, "That car will cost you an arm and a leg, or you can just gimme your window."
That's how New Yorkers negotiate. Most New Yorkers have to pay the arm and the leg, because everyone has an arm and a leg, but nobody has a window.
b. I also got to meet the Balzer (Alessandra) and the Bray (Donna).
There are no pictures of them. Someone warned me that if I took a picture of Alessandra, she would make sure I'd never receive a window in any city.
Despite the threat, they were both charming, and Alessandra delivered a kick-a speech the next day at the conference.
c. I met Kristin's right hand. I also met Sara Sargent, Kristin's assistant, and an editor in her own right. Rite? Wryte?
Sara and I bonded over tennis (she played in college) and Rafa (she doesn't give me strange looks when I suddenly blurt stuff like, "I want to be his wedgie!")
d. I met the lone man on the Balzer+Bray HarperCollins team, Jordan Brown.
This was very exciting. I wanted to take pictures, but I didn't want to scare The Man, because they are so rarely spotted in the wilds of the HarperCollins jungle.
I observed The Man for several long minutes, though, and was pleasantly surprised to learn his eating and drinking habits, and social customs, are very similar to mine.
At the meet-and-greet, Michael and Jordan talked mostly to each other. And the rest of the girls mingled. It was like a junior high mixer.
e. I met so many other wonderful people on the sales, marketing, and publicity side.
I won't try to name them all, for fear that I'll leave someone out, and for bigger fear I won't keep all their names straight, and for biggest fear this list will be way too long.
Okay, on to number... Six? We're only on six? Who's idea was it to put alphabetical sub-numbers?
6. Sara Zarr killed at her keynote speech. 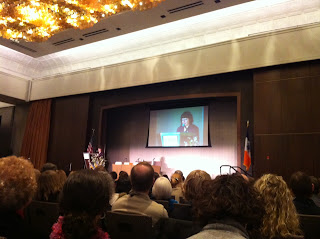 She was incredible, moving, entertaining, everything you want in a speech. She received a standing ovation for her words, and it was well deserved. I am honored to know her.
7. I got to hang with my niece Leena. 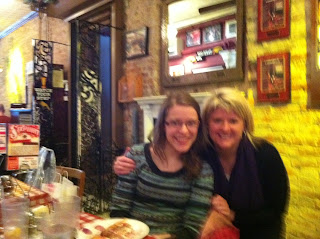 That's us at Lombardi's Pizza, where the air is so thick with the smell of garlic that it's impossible to get a clear picture.
Just kidding. That picture was taken by a tourist who was intent on disproving the theory, "It's as easy as point and click!"
Later, we got to visit Leena in her natural habitat, the Manhattan School of Music. 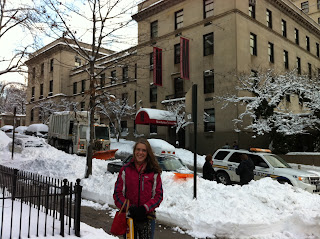 She lives inside the school, in an incredibly messy dorm room. I found myself very jealous she gets to live this experience. It's just like Anna and the French Kiss! Although Leena assures me there is no french kissing going on.
9. I learned what a Kentucky Brown ... something is.
At lunch with Michael and Kristin, I saw a strange menu item called a Kentucky Brown something. I can't believe I can't remember the name. I'm thinking "Kentucky Brown Boy", but that can't be right, can it? I mean, that sounds a little... wrong.
Anyway, the dish was a piece of brioche, with turkey and bacon on top, smothered by beschamel sauce.
Kentucky Hot Brown! That's what it was called. And I'm suing the restaurant for making my jeans too tight.
Okay, let's call it quits there. I'm exhausted, and all I can think about is the Kentucky Hot Brown, and how I'd fly to New York just to eat it again.
Enough about me. How about all y'all? Speaking of "y'all", I met a fellow writer Bryan Bliss, who assumed I was from the South. When I told him I was from Utah, he's like, "Well, that's like the South."
Yeah. Utah is totally the South. Of Idaho.

So, what's everyone up to this week? Anyone else ever eaten a Kentucky Brown Boy?
Posted by Brodi Ashton at 9:43 AM