First Entry in the New York Report: aka how my introduction to NYC involved many bodily fluids people don't talk about.

Hey ya'll.
I'm back.
I've been five days without wi-fi, and that is six days too long. Apparently New York is one of those cities that doesn't realize wi-fi should be as free as air. Of course, New York is a city that charges for their air, so maybe the concept never occurred to them.
If you want to see a New Yorker make a funny face, ask them where to get free wi-fi. But I'm not bitter. Totally not bitter.
Now I'm staring at the computer screen, wondering how to blog. It's not like riding a bike. If you don't do it every other day, you will forget how.
Let's start with a rundown of the top... I don't know... 13 things I learned/observed in New York.
1. It's always an appropriate time to back away from a crazy person.
On my first day in the city, a crazy man on the corner of the street yelled at me for "ice skating with the man". I apologized and moved on, because I could have, at some point, ice skated with a man, and how am I to know if he was the man?
Next, another man on the street started puking his guts out, right in front of me. So hard his pants fell down. This kind of excitement has never happened to me before, and I was sorry I was alone because this is the kind of thing one should share with others.
Lucky for you, I had my camera phone. 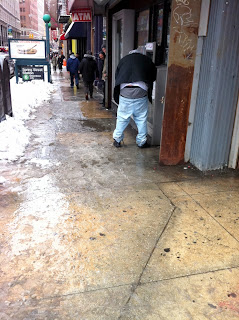 I especially love the two guys peeking around the corner, partaking in the entertainment without having to get involved. 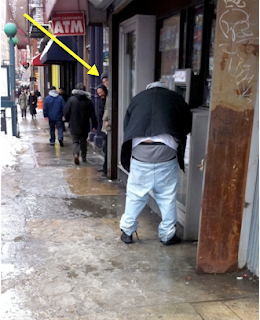 As a finale to the trifecta of awesome, another crazy man sat across from me on the train, hitting himself and calling himself not nice names.
Everyone around us immediately moved away. I hesitated, because I never want anyone to think I'm judgmental, but then by the time I realized that yes, the smart thing would be to move away, I felt it was too late. My window to move away subtley had long passed.
After a few moments, the poor man peed himself. And that's when I learned a good lesson, which was later confirmed by several friends who live in New York:
It's always an appropriate time to move away from a crazy person.
2. There are lots of old things in New York.
Here's a picture of the oldest church in America. 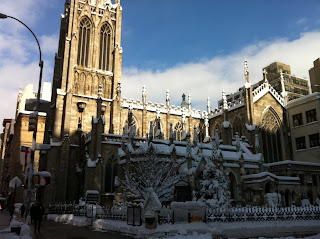 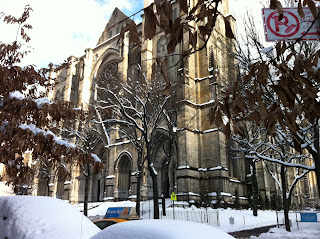 It was built in 1382, by Sacajawea... and... Ghandi. And Lewis and Clark. It was quite the team venture.
Okay, so I'm not quite sure about the history... oh, wait. Hold the phone. Wrong church.
Lemme shuffle through... okay. Here we go.
Ahem. And below, presenting... The. Oldest. Church. In. America.
It was built in 1982, by a Saint named Dylan, and inside are several confectionary offerings of all sorts of shapes and colors. There is an altar in the middle, praising the immaculate invention of the cinnamon bear.
I spent much time worshipping in the Church of the Dylan's Candy Bar. True to the advertising, it did bring me one step closer to heaven.
3. Sometimes Agents don't like to get their pictures taken.
I got to meet my editor Kristin, and the rest of the publishing team at Balzer and Bray, and when I requested one measly little picture, my agent Michael Bourret's response was, "Oh man. Now that I've sold your book, do I really have to put up with getting pictures anymore?"
Um... yeah.
I assume his trepidation comes from the fact that I always point out his million dollar smile. But it's not like I show the same picture over and over.
Have you seen this one of us in L.A.?
The way he was grumbling, you'd think my camera flash blinded him with each shot, when that only happened twice. So, without further delay, I present the one picture of Michael, Me and my editor, the incredible Kristin Daly Rens, in New York City.
Enjoy it while you can, because that is the last picture of Michael.
I always thought the HarperCollins building would look like something out of the Wonka Factory, where cover art is carried to the appropriate rooms by a river of words, and pipes of... um... words.
But, HarperCollins in real life looks a little less... magical. But a lot more practical.
After a reception at the Balzer and Bray offices, Michael, Kristin and I went to lunch. Even the walk was magical, because the snow had just fallen the day before, and it had only just started to turn black with the gunk that blankets the entire city every day.
Seriously, we're only on number 4? Okay, I'll save you all from the entire ship's log of the trip. More to come on Wednesday.
How about all y'all? Have a great weekend? Did you enjoy the time away from my blog? Did Sam fill in okay? Was he attentive in every way?
And finally, have you ever seen a guy puke so hard his pants fall down?
I have.
Posted by Brodi Ashton at 4:22 PM