I've officially given away all of my guitar pick necklaces after this week's trivia blast on the EVERNEATH Facebook Page.
I will have to make more. The necklaces are very small and intricate, so I've employed a bunch of hamsters to do the hand-painting on the guitar picks. 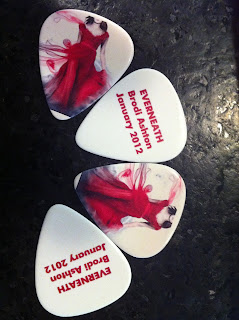 Their union is currently on strike, with a SHAME ON BRODI ASHTON sign in my front yard. But I am heading to the negotiating table soon, so we should be back on track in the near future.
I will announce the winner of BACK WHEN YOU WERE EASIER TO LOVE on Monday.
Meanwhile, Kid C got his cast off. 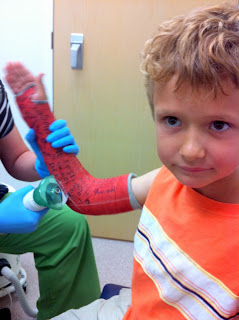 Look how brave he's being. And that is a saw going in the background. And that saw is loud. The first thing he said after the cast came off was, "So this is what I look like in the future."
He got it off on Tuesday, and ever since he's been keeping his right arm bent at a 90 degree angle, and his fingers stiff and together. So basically, the right half of his body is like a robot.
Each time we try to get him to straighten his arm, he screams, "You're breaking my arm!!" In public.
Also, he still does his homework with his left hand. He claims that he is permanently left-handed now.
Somebody help me.
Posted by Brodi Ashton at 11:12 AM