Pakistan bodyguards: Everyone should get one of those!

My ode to the Major.

Ah, the Major. Where do I begin?

Yes, for the first few days, I thought his name was "Major". Like "Meyjooh". Yes, at first, I didn't think he was capable of a smile. Maybe he could smile. He just didn't find me funny. And when someone doesn't find me funny, I laugh harder at my own jokes to make up for it. Like hysterically.

I'm betting Special Ops in the Congo was looking pretty good to him after our initial meeting. 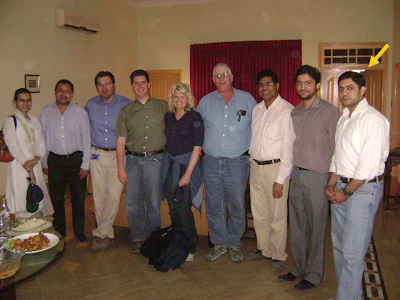 The Major: thrilled to be here.

When I wandered around the house in Ranala and found my way to the roof, he followed me. Silently. I fought the urge to say something like, "What? It's not like I'm gonna steal anything. Sheesh." 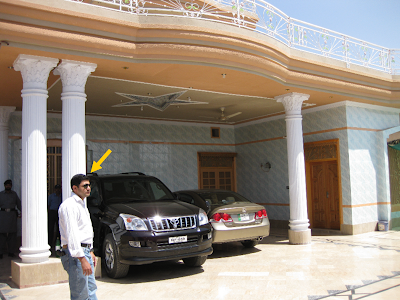 The Major. I thought he was protecting the cars.

I didn't know that every time we drove somewhere, he was following us in a second car. I didn't know his previous work included stints on UN Peace keeping missions throughout Africa.

Once I found out he was actually ranked a Major, it only took me, like, five minutes to conclude Major probably wasn't his given name as well.

That would be too coincidental.

Many times, I didn't even know he was with us. He was like the whisper on the wind. A shadow in the corner of your eye.

For instance, on the plane ride to Pakistan, I met an actor from L.A., Salman Bokhari, who had grown up in Lahore. He was also bringing an American friend, and he was excited to show off his country.

It's not like I was taken in by a scam artist or anything. I did my homework. I looked up his profile on IMDB. He really is an actor.

So on day two, the day Saira and I were planning on shopping at Liberty Market, Salman called my hotel. He and his friend were going there as well, and he suggested we meet up.

So I sent off a quick email to the Company. AKA, those in charge of my security.

I thought my email said something like this: "Hey. Remember that cool Pakistani guy from the airplane? I'm gonna meet him at the market."

But the way everyone reacted, I may have typed something more like this: "Hey, remember that strange guy from the plane? He wants to meet me. Alone. In a dark alley. He says he wants to show me his cool gun."

I almost lost all privileges at that point. It nearly sent me into lockdown mode.

Saira and I still went shopping. And this is one of those points where I didn't see the major until we finally met up with Salman and his friend. Then, suddenly the major was there. Looking dark and forbidding. And totally unamused. You know, his usual look. 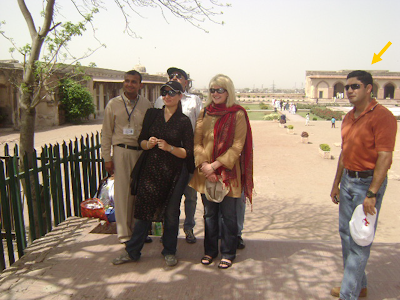 As a side note, Salman's friend Michael remarked how great it was I could make friends in Pakistan so fast. Salman immediately corrected him, saying, "There's no way she walked down the street and made friends. You just don't do that in Pakistan." 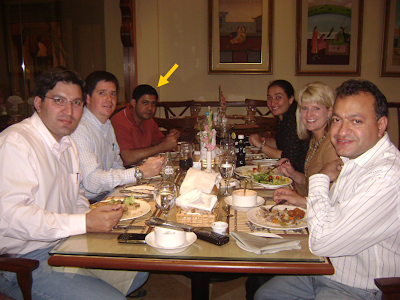 The Major's eating, but he's not happy about it.

When we entered the security check at our hotel the first time, the Major joked with Saira about where to hide his gun.

I'm all: "You carry a gun?! Oh crap. Where are we going to hide it? I'm gonna end up in a Pakistani prison."

He just ignored me. 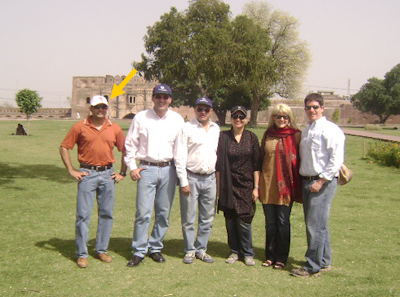 The Major: longing for the dangerous days of the Congo

Despite my original misconceptions about his role in my safety, and his obvious disdain for very funny American humor, I soon became accustomed to his face. 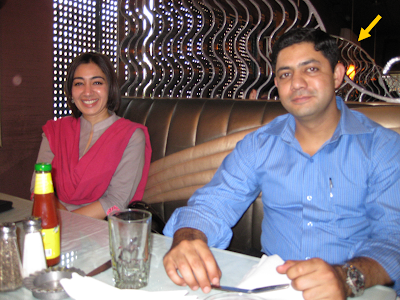 The Major, after I told a really funny joke. Is that the slight hint of a smile?

In the more risky areas of our tour, at the slightest sense of unease I could turn around and know he was there. When curious bystanders began following me around, getting a little too close for comfort, he was there.

I'm telling you, there's nothing like the feeling of knowing someone has your back. And that someone has a gun. (Although despite numerous efforts, I never could spot the darn pistol. I guess that's the point).

He even smiled once or twice. And although I'm sure he was bored out of his guts having to follow me around while I shopped, he always offered an opinion on which shoes I should get, and which outfit to buy.

When they were dropping us off at the airport, lining up to say goodbye, I really had to stop myself from hugging him and saying something along the lines of, "Scarecrow, I think I'll miss you most of all."

As Sam and I made our way through the throngs of Pakistanis lining up outside the airport, I started to think Sam was infinitely unqualified to protect me. Again, I was very blond, and very American. The lines weren't moving, and the crowds were getting pushy. I turned around, as I had done so many times on the trip, and there he was. 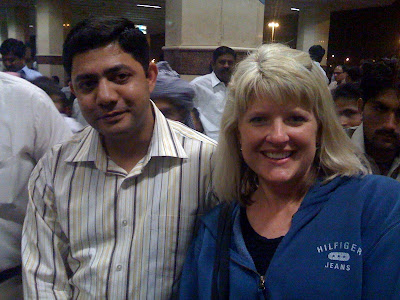 The Major at the airport, obviously fighting back the tears.

He had come back to watch the crowd and make sure we were okay. Once we had made it safely inside, I could no longer see his face. But I could see his hand above the crowd, waving and then giving me a thumbs up.

Okay, I may have squeezed out a couple tears. Once we had parted ways with the Major, and Sam left me to use the loo, I told him, "The Major would be so dang mad if he knew you left me like that."

It's been great, because now that we're home, that line never gets old. "The Major would never have allowed that." or "I'm so telling the Major what you did."

Or Sam's personal favorite:"Where's the major when I need a man around?"

BTW, next week we will be having more contests for autographed books. So, be prepared with your thinking caps, because there might just be a few pop quizzes.

I jest. I took my own thinking cap to the DI last winter. It's gone for good, but I'm sure it went to someone very needy.
Posted by Brodi Ashton at 2:54 PM

Email ThisBlogThis!Share to TwitterShare to FacebookShare to Pinterest
Labels: Pakistan