Thanks to all who entered by answering the questions, or following the blog. To kick off the "Free Book Friday", Smokey the Hairless Cat has chosen THREE winners.

And for the rest, another contest Friday. (No hard questions, I promise).

Winners, please email me at brosam (at) gmail (dot) com with your book choice from the pictures below. (These are all autographed. I was too lazy to type them out, hence the picture). Choose at least two, in case there is overlap. 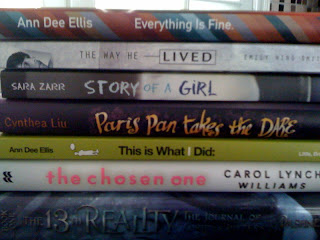 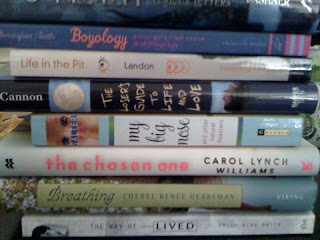 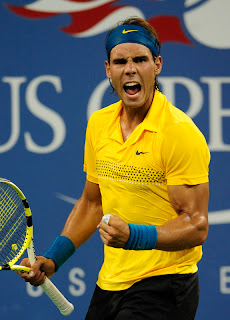 You know what I really like about Rafa? He's full of quirks. All writers have quirks, most are mad as snakes. And I'm betting a high percentage of my blog readers have quirks.

Rafa's quirks:
1. He picks his wedgie between every point. (I found out the polite way to say this is, "He adjusts his pants.")
2. His water bottles have to be placed under his chair just so, and on every changeover, he takes a sip from each one and then returns them to their exact position.
3. He doesn't step on the lines in between points.
4. He tucks his hair behind his ears before each serve.
5. He towels off between every point.

Maybe that's why I love him so. He's mental.

My Holiday weekend in a nutshell:

Sam is Heartless
On Monday, Sam’s sister had a poolside barbecue. Halfway though my hotdog, I started to choke.

Sam’s offenses:
1. At first, he looked annoyed that I was interrupting some story someone else was telling.
2. Then, he patted my knee. As if that action would dislodge the hotdog stuck in my throat.
3. He asks if I have a drink. When I shake my head vigorously, he puts on a concerned face and (subconsciously) takes a sip of his Tab as he watches me sputter.

Um, I guess the honeymoon’s over?

In my quest to become Hott!TM Friend A and I have been lifting weights at the gym. Friend A is a star. If we were Crockett and Tubbs, she’d be Elle Macpherson, and I’d be Tubbs.

In one mirrored corner of the workout area, there is a padded floor, and a large sign above it that says, “Courage Corner.” 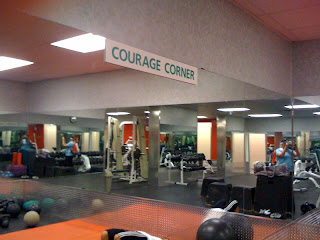 I used to think it was really lame. And every time I felt tired, I’d growl to Amy, “C’mon. It’s Courage Corner. We cannot fail!”

But on Monday, we went to Courage Corner to do abs, and found it was full. So we had to settle for another area of the gym, a corner I now refer to as “Judgment Alley.”

The entire wall in this corner is a window, instead of a mirror. And on the other side of the window are the Yoga nuts. They face the window, twisting their bodies into shapes that can only be described as alien. And they just stare through the window, into our little padded corner. 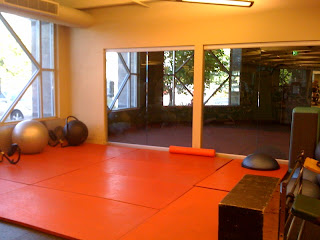 You can see how close they would be... noses to glass

I got a hernia just watching them. There’s an army of them, perfect little rows and rows. And they were watching me. Waiting for me to lug my big fat human butt over to the padded floor (directly in front of them) to do my “crunches”. (I use the quotation marks purposely there).

For a minute, I couldn’t help feeling like the entire world was made up of yoga nuts, and I was a caged animal in the zoo, and they were all watching me, saying, “Look at the fat chick. A rare species, seldom seen out of the wild.”

Nut #3: “Don’t feed it, though. It may snap at the slightest provocation.” Can anyone relate?
Posted by Brodi Ashton at 9:58 AM