Life at the Ranch is Hard. Sometimes Puppies Die. *Added: But no Puppies Die in this Post!

Welcome back. Anyone else so excited school resumes today?

Life on a Ranch is Hard

We went down to Sam's Uncle's ranch in central Utah for Thanksgiving. It's difficult to describe the ranch, because in the middle of this stark rugged terrain is a little oasis with three ranch houses, a shooting range, wine-fry (wi-fi), satellite television and warm water. 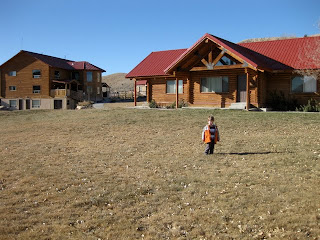 Ranch Life is Hard. Everyone kept reminding me of this fact over and over. And over:

We have to hand mash the potatoes... 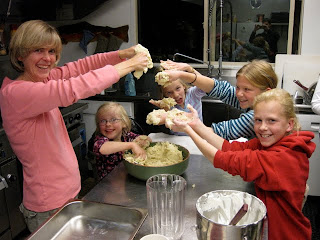 We have to restore the art on the Indian Art Rock. (It's okay that we're messing with centuries-old artifacts... we totally know what we're doing with our crayons.) 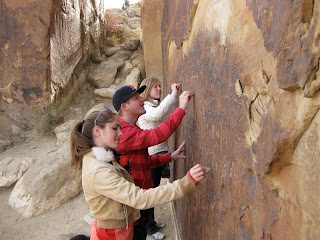 There are grates on the ground to keep little boys out. (Kid B only fell through once.) 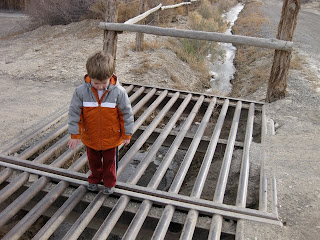 Every so often, you have to fight the urge to throw a little kid off the cliff... 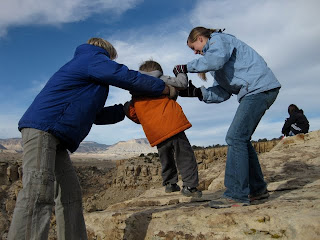 If you wanna eat, you have to know how to handle a gun... 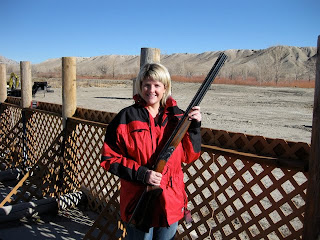 Here are the women, performing the most essential task for any Thanksgiving dinner... That's right. We're shooting the stuffing. (Stuffing doesn't usually put up much of a fight. But you should see the jello. Fast little sucker.) 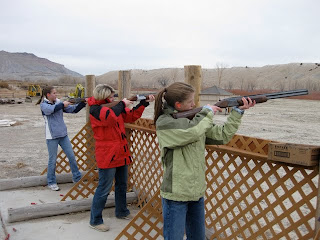 After dinner, the natives come over to perform a traditional rain dance. (Who knew rain dances included karate kicks, and a background song of "Everybody was Kung Fu Fightin'?) 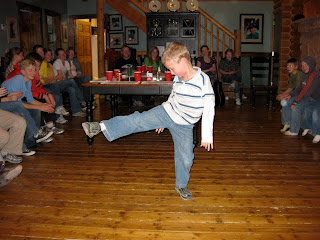 Since these girls kept accidentally aiming at Uncle Glendon during a gun lesson, he only allowed them to shoot with their fingers. He told them this was how the cowboys of yore did it. 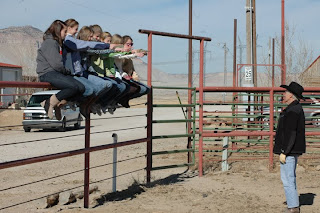 Even newborn pups have it hard on the Ranch. Look closely at the picture below... Do you see the little white pup, closest to the dog's face? That little pup's neck was caught inside the steel ring of the collar on the mama dog. 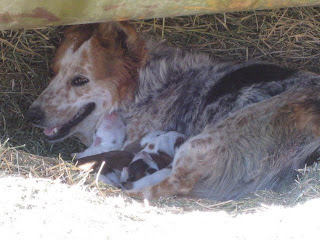 The poor thing was choking, and every time the mother turned her head, the pup would be whipped about.

So I totally freak out. The mother won't let us anywhere near her because she doesn't know us, so Bro-in-law Ed sends his two youngest daughters to get the rancher Adam. 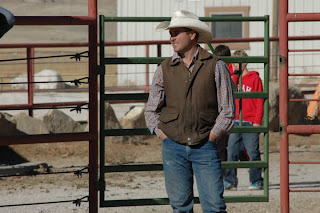 (Here's Adam, thinking, "When are the city folk just gonna leave us in peace?")

The kids return with a message from Adam. He says: "Just turn him over."

Hunh? What kind of advice is that? (We found out later the girls told Adam, "There's a puppy on his back, and his legs are sticking up in the air." Which I guess would warrant the "Okay, so turn him over" advice.)

This time, Ed's clear. He tells the two girls to tell Adam to, "Get his butt over here."

The message takes a little longer to deliver, because the girls are unsure whether or not they can really say the word "butt" without repercussions, but finally Adam shows up and coaxes the dog out, and yanks the little puppy neck to freedom and saves the day. 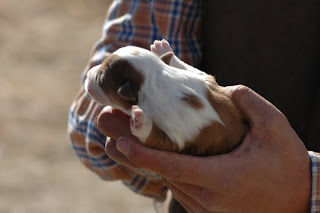 I later found out that upon hearing the news that the puppy neck was about to be snapped, the ranch hands sorta shrugged their shoulders and said, "Ranch life is hard."

Grrrr. I know this.

It's raise cattle, hunt for food, water-shortage, dry, dusty, dirty boogers, farmer blow tough. I know that sometimes the cattle leave, and they don't come back, and they're not going to a spa.

But come on! Does ranch life have to be "Newborn Puppy hanging by its neck, choking indefinitely, just needing a little nudge that nobody will give" hard?

Apparently yes. The mother promptly ate the baby. Punishment for getting its neck caught. Because ranch life is hard.
*Update: Just to be clear, the dog did NOT eat the puppy. This is how mothers transport their little ones. I promise. 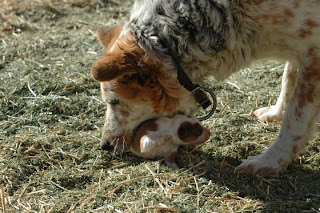 Here's Adam right before he yanked Kid B off the horse by his leg and threw him across the arena. Because ranch life is hard. 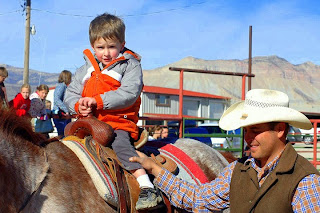 I jest. There was no kid-throwing of any kind. The puppy lived to face another hard day on the ranch. My job was done. I tipped my hat to the ladies and sauntered off into the sunset.

So how was all y'all's Thanksgiving?