So we went on our church campout last Friday night. Sam called me Thursday afternoon and told me there was a chance he was in charge of "a large percentage of the entertainment portion of the campout."
I assume he was using words like "percentage" and "chance" to soften the blow that he was giving me 24 hours notice.
I did what any supportive church wife would do: promptly laughed into the phone and declared, "Looks like you're S-O-L.  Wow. A guy who procrastinates. Could you be any more of a cliche? Why don't you leave the toilet seat up, and then go scratch your nether regions."
Normally, I would be totally up for planning the entertainment, but 24 hours is not enough time. I need to let an idea percolate. 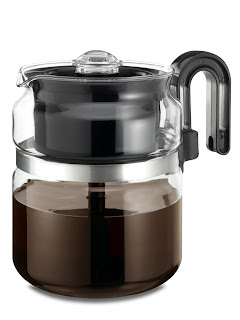 Afterward, I let the idea marinate: 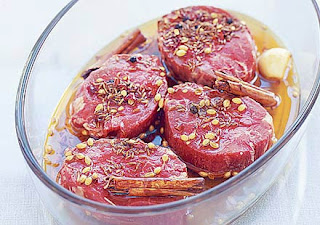 And finally, I leave it alone for a while to simmer: 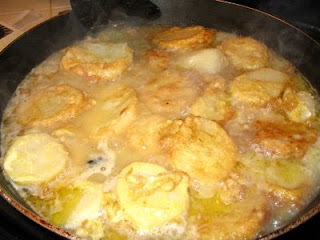 (Do not try this at home, because no matter how much time you have, coffee will never turn into raw meat and then potatoes. I know from experience.)
Not surprisingly, this is as close as I get to actually cooking.
So, Sam's all, "Can't you percolate faster?"
No. I can't. And here's the thing about ideas: if you try to rush them, it just slows down the whole process, and then you get a nasty case of writer's block. At least, that's what happens to me.
When did we stop talking about camping entertainment and start talking about writer's block? You see how I did that? Smoothly took camping story and veered left toward revision advice.
If I have three weeks before revisions are due, you can bet two of those weeks will be simply going about my daily life, ruminating.
Ask any writer, and they'll tell you much of writing is looking out a window, taking a shower, going for a walk, leaving the brain open for that a-ha moment.
Now for a choppy segue back to camping story. So, I ask Sam what he has in mind for entertainment so far. He says, "I thought we could hang out around the campfire, and maybe sing camp songs."
What I think is:
1. Does he even know any camping songs? Besides maybe Koom-by-yah? (totally nailed that spelling, right?)
2. Is someone bringing a guitar? Or is he going full-on acapella?
3. Is he actually going to stand up and say, "Now we shall sing" or is he hoping for a moment when the campers will just spontaneously break into song?
But what I say is: "That sounds great. Go for it."
Because if I don't have any better ideas, I shouldn't give an opinion on his. And I don't have any better ideas. Because there was no time to percolate.

BTW, Sam has since said, "Can you please stop talking about percolating?"

And now I'm off to go percolate in the shower. It can get messy.

So, how do y'all cultivate ideas?

p.s. Is camping with children ever worth it?
Posted by Brodi Ashton at 9:31 AM