Questions from an Eight Year Old about Bin Laden: aka Why I'm tongue tied.

This morning, I talked to Kid C about what happened on September 11, 2001, and then I told him about Bin Laden getting killed, and that this was a historical day. 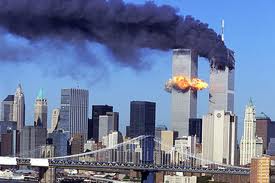 He's trying his hardest to comprehend it all, and he's asking me some tough questions.
"Killing is bad right? Then why are we cheering?"
"Doesn't he have a family who will miss him?"
"Is Bin Laden going to Heaven? Then where is he going?"
"Why does he hate us? He doesn't even know me. Would he be happy if I died?"
"Did Jesus want him dead?"
"Do you think they killed him with a knife or a gun? Which would hurt more?" (His bet was a knife).
"Didn't he have a shield?"
And finally...
"Brodi, what's a double tap?"
And then, as he's trying to figure out how he's supposed to feel, he's all, "So it's okay to celebrate, but not to party."
That's as good a plan as anything I've got.
Anyone have any answers?  All I know is I was relieved when it was time to go to school.
So, where were you on September 11?
Sam and I were packing our bags for graduate school in London. We had plane tickets for September 12. Needless to say, our flight was postponed.
Posted by Brodi Ashton at 8:26 AM