Just leave a comment today to enter. I have a bunch of Sara Zarr's books to add to the giveaway pool.

I went to a reading/signing for the launch of Sara Zarr's newest book Once Was Lost. The book was partially inspired by the Elizabeth Smart incident. 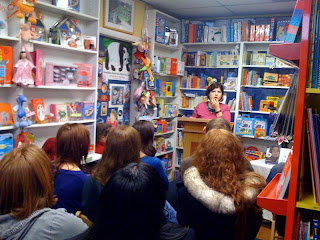 Sara was so personable and did a great job discussing her book and the writing process. I can't wait to read it.

My favorite part: When she talked about switching the book from third person to first person.

Sara: "It becomes a whole different book. It's not like you can go through and just change all the she's to I's."

Afterward a bunch of us went for dessert at the Dodo.

Here are the headlines:

*Matt Kirby is accused of being a homewrecker when he sits between Sara Zarr and her husband. 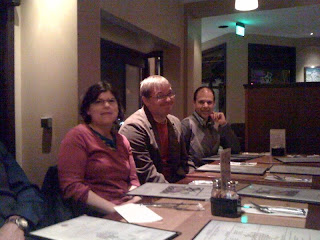 *Below is Matt Kirby saying it wasn't his fault. (He has since promised to explain himself in the comments section). 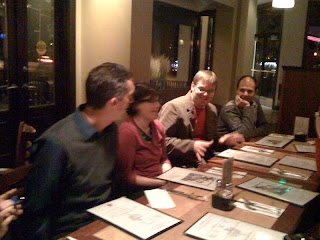 *Bree Despain admits she is unable to read lips or hand gestures after I spend 5 minutes mouthing the word writer to her, and then miming the act of typing on a keyboard. She was sitting directly across from me.

side note: This one time, when we were on an airplane, Emily Wing Smith and I had seats together. We found a third seat, and got Bree's attention. (She was sitting a few rows back). With exaggerated movements, we point to Bree, and then to the empty seat next to us, and then we wave her forward. We repeat five times. Bree gives a puzzled look, and shakes her head. She can't figure out what we're trying to say. Finally the whole plane goes, "They want you to sit next to them!"

*James Dashner joins our conversation just as I'm saying, "Speaking of nipples..." This does nothing to change his mind that I'm weird.

*It's okay, because this one time, in front of a crowd of people, he announced to the masses, "I am a psycho." Very weird.

*I get in trouble with the waiter "Cody" because I'm talking while he's telling us about the specials.

*I decide to blog about Cody, and so I point my camera toward him and say, "Can you smile?" He frowns. "Yes, I can." He walks away. It becomes official: I have offended Cody for the last time. He's fed up and he's not gonna take it anymore. 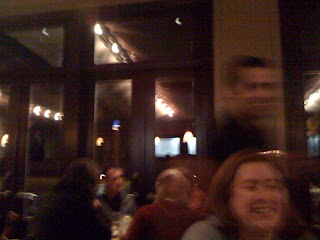 (Cody, posing for a picture)

*Sara B., Valynne and I start calling him "Colby". Strangely, this does nothing to melt his freeze.

*James rescinds offer for fear of repercussions from his wife. 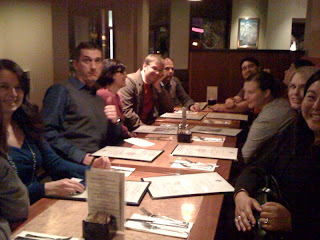 (James using his thumb to indicate who we make the checks out to...)

*Matt Kirby tells me his wife reads my blog. She also kept her last name, like me. I ask her name, and he won't tell me. He's afraid I'll call her out. I would never. So, Hi to Matt's wife!

*I give up my seat to Natasha Maw from Mawbooks because her work is more important. She blogs about books.

*To cover up an awkward moment, I announce to the table that I hate fruit.

*My end of the table decides the worst name ever is Peter Willy Johnson Dick. Now I have a new name for my laptop. And I'm apparently 12 years old.

*I take a billion pics of the table. Manage to cut off Sara B. and Valynne in every single one. I'm voted worst picture taker, as evidenced below. *We collectively decide we're gonna use that line whenever someone questions why we do something.

*Someone makes an inappropriate joke about aliens and bananas.

What's everyone doing this weekend? My kids have a 5-day weekend, so I'll probably spend my weekend cowering in a corner of my house, mumbling incoherently and chewing on the corner of my sofa.

Next Tuesday, James is launching his book The Maze Runner at The King's English. Everyone's invited. It's at 5:00. Check out his blog for more details.

For any of you named Peter Willy Johnson Dick, I apologize, and I will send you a free book of your choosing.
Posted by Brodi Ashton at 7:18 AM