Good Morrow yon bloggerland. It's Free Book Friday! Find out how to enter at the bottom. They're just a bunch of questions again.

1. I went to James Dashner's launch party Tuesday night for The Maze Runner. 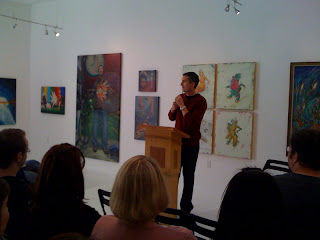 James spoke to a crowd of young fans. He talked about his own road to publication, and then he read an excerpt from the book. 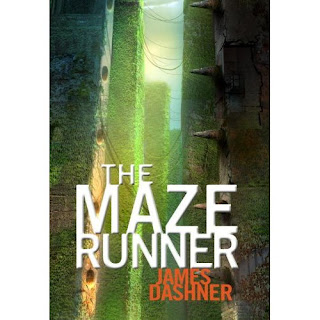 In the excerpt were the following words: bulbous creature, glistening flesh, buggin, instrument-tipped appendages protruded from its body... and undies.

If that doesn't make you want to read the book, I don't know what will. And that was only two pages.

Oh, and he also talked about two influential books from his childhood: Ender's Game and LOTF. (LOTR's lesser known cousin, Lord of the Flies). He also named a character "Newt", inspired by Aliens.

Congratulations, James! Go and be successful.

2. Afterward we went to The Dodo (I know, I'm totally boring and predictable) and that's where I found out Sara no longer tells her husband Ben what we talk about at these things. She just points him to my blog.

So, sorry if you're sick of the list of highlights, but Ben is desperate to know what went down, and Sara's not talkin'. 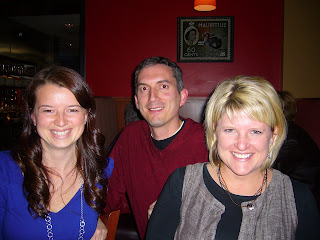 (Bree Despain, James, Me. I tried to make me skinnier, but then James disappeared, so I reverted to the original.)

*The entire table can't believe Emily brought up the subject. They take a spontaneous vote as to who would be most likely to bring up the subject of "chafing" at the dinner table. The vote is unanimous, and it's not Emily.

*I demand a recount.

*Bree's husband Brick starts a sentence with the words, "According to the Gossip Girls..." Yes, he is a man.

*West Valley is dubbed "Jersey" to Salt Lake's "New York." I know, I don't understand it either. But apparently it's from the Tao of the Gossip Girls.

*James accuses me of buying too many copies of The Maze Runner. He tells management that if they run out, I should be forced to give up my copies.

*James admits he doesn't have a catchphrase to go along with his autograph. My suggestion of "Be a-MAZE-ing" is ignored.

*Douglas Cootey promises to paint his nails and squee in public for an Advanced Copy of Bree Despain's The Dark Divine. She agrees.

*I offer to do a jig for a copy. She declines.

*I tell Emily Wing Smith she has tiny ears. She replies: "You must have me confused with you." Yes, I get us mixed up all the time. We're like twins.

*There is a lengthy discussion of preferred underwear.

*Valynne suggests we bedazzle t-shirts. Sara suggests we stencil t-shirts. Hands down, these suggestions are the least likely to ever occur in the history of suggestions at our dinner table. Emily looks at them as if they are speaking Cantonese.

*I get a little angry when someone swipes the last two lemon bars out from under me.

*James promises he'll buy a bunch of copies of my book.

*Bree complains she never says anything that makes it to my blog. Can I help it if everything she says is always incredibly, over-the-top appropriate? And that would be so inappropriate for a blog such as this.

*Someone is called out for butting in line.

3. Check out Matt Kirby's blog for a very cool Carl Sagan video: Cosmos set to music. It's psychedelic. Upon first viewing, you think: "Oh. Sorta cool." But then you find excuses to watch it again, and again, and again, until the phrase "Not a sunrise, but a Universe rise" is running through your head like the ticker-tape on Wall Street, and then you find yourself craving the video, as if it were a Diet Coke on a Monday morning.

So, watch it with caution.

To be fair, I'll answer them too.