Cardio Tennis: It's not Pole Dancing, and It's Not for Wusses. It's not for Super Cool People Either.

Thanks to everyone who entered Friday's contest, and special thanks to those of you who provided a Morgan Freeman Mad Lib. The winner will be announced on Wednesday's post.
What I'm Reading: Just started Dark Days of Hamburger Halpin
What I'm Writing: 15,000 words on current WIP
1. Happy Monday, y'all.
**Sam told me to warn you: Don't read following paragraph if you haven't had breakfast**
Well, not very happy at our house. Kid B has been blowing chunks. You know it's bad when the only solid chunks are made of milk.
**End Warning**
I know this, because it was all over me. I think he lost half his body weight with that move.
2. Cardio Tennis: It's not what you think...
Saturday morning, my friend Alissa convinced me to go to a Cardio Tennis workout. She convinced me by telling me there would be music.
I'd never been to Cardio Tennis. All I could picture was all of us with our racquets, jogging in place to the beat of the music, or stepping up and down on a platform, or dancing around a metal pole suspended from the ceiling.
What else was I supposed to think, when I Googled Cardio Tennis and found this: 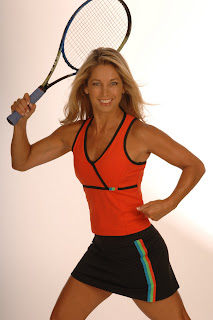 Am I alone on this? That is not what playing tennis looks like. With one arm, she's pretending to hold a pail of water, and with the other, she doesn't even look like she knows she's holding a racquet. She's either about chop vegetables with that thing, or dismember her students.
And I thought, if there's going to be dismemberment, I'm so there.
So we get there, and we are the only girls, with eight men. The instructor comes out with a boom box (do people still call it this? Boom box?), blasts some 90's techno rock, and then she starts firing balls at us.
It was intense, and it looked nothing like the picture. At one point, I was paired against this one guy. I was instructed to hit passing shots. He was instructed to sacrifice everything including life and limb to thwart me. It was war and it was ugly.
Afterward, as we were picking up balls and bloody appendages, he sidled up to me and we both acknowledged the fierceness of our competitor a la Starsky and Hutch.
him: "I like your style."
me: "I like your moves."
I like your moves. sound bite  Starsky & Hutch sound bites

3. Ice Dancing. Class with a capital K.
Anyone catch the ice dancing last night? Anyone see the Russian pair, and wonder what alternate universe we'd landed in where this is a sport? 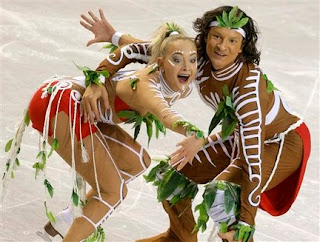 At least they weren't toting guns and shooting stuff.
So, how was your weekend? What are you Reading/Writing?
Posted by Brodi Ashton at 8:35 AM