Evolution of Love... and Are You Smarter than a First Grader?

Happy Friday. I can't do a Free Book Friday until I actually get off my butt and mail the books to the previous winners. Hopefully next week.
Must Be Love
Kid C came home with a Valentine Card from one of his favorite girls. He has four favorites. But he told me he can't be in love with any single one of them until he's sixteen years old.
I don't know where he gets his information, but I thought this reasoning was sound. So I called up my first grade boyfriend and told him I couldn't have really been in love with him, and I faked all my love letters. He asked for his pin back. It was a Michael Jackson pin.

In third grade, my cohorts and I had moved from monogamous relationships to that all out free-for-all known as kissing tag. This one boy with a brown turtle-neck (I can't for the life of me remember his name) followed me all around school, trying to tag me. I mean, "tag" me. Which, in this case, really does mean tag me, because as much as we played the game, I'm pretty sure there was no actual kissing involved.
Anywho, turtle-neck boy followed me around the whole school, and all I could think about was how his turtle-neck must be choking the life out of him. So, although I didn't get any "action", I did develop my endearing aversion to "things that choke". i.e. turtle-necks, necklaces, rings, scarves... Units clothing.

In sixth grade, I received my first kiss. Her name was Tiffany and it was a game of spin the bottle. We were at an all-girls sleepover, and I'm pretty sure when we read the rules to "spin the bottle" we must've missed the part where it says: "Works better in a co-ed environment."

In the immortal words of Katy Perry: I kissed a girl. I didn't like it, but I did taste cherry chapstick.
I'll tackle the junior high and high school years next week. But back to Carter's Valentine Letter... he asked me to decipher it. 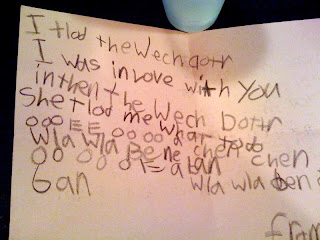 **Don't scroll down if you want to play**

It seriously took me hours. Don't try to read the words as words. That's impossible. Just pretend someone spilled alphabet soup on a piece of paper and your job is to sound them all out. Scroll down a ways for the answer, but let me know in the comments if you could figure it out without scrolling down.