How the Olympics are like the Hunger Games... and the Free Book Friday Winner

The Free Book Friday Winner is:
SalGal
Email me your address and book choice. (My email addy is in sidebar)
Many of you have asked how I pick the winners. It's simple:
1.    I assign a number to every commenter, starting at 1 with the first commenter, and continuing on. If the commenter has tweeted or blogged about it, they get another number too. 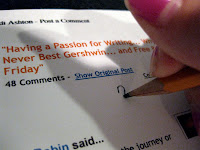 2.    I take all the numbers, and I write them on separate squares of toilet paper, and attach each one to a tiny little parachute.
3.    Sam then takes them sky-bound and drops them over Vancouver.

They are judged in much the same way as the pairs figure skating event, with high points awarded for artistry and synchronicity, and with a slight proclivity toward Russian entrants.
Anyone watching the Olympics?
Evan Lysacek was amazing on the ice last night. He makes it look so effortless. 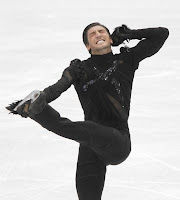 Okay, maybe that move took a little effort.
I love watching men's skating, because like many girls from my generation, I wanted to grow up to be Johnny Weir. 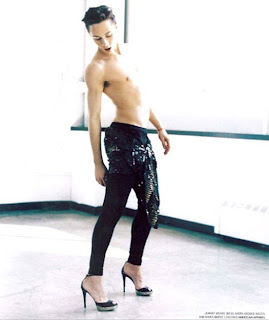 Did you see the looks he was throwing the judges last night? He'd wink at them like they could get him VIP seating at the Bedazzler Convention. (I bought my tickets last June. I can't wait!)
Winter Sports can be extreme, and not just a little schizophrenic. Like the biathlon. 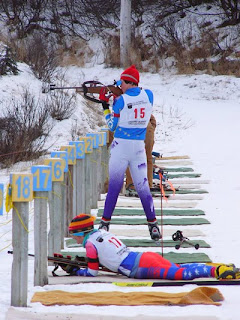 Cross country skiers are forced to stop after each lap, drop to their knees with skis on, and shoot targets. It just seems so random.
Like the gamemaker was all, "They go round and round in circles, with sticks on their feet, then they stop and..." scratches head... "get attacked by bears?... no... chew 17 saltine crackers and whistle the Star Spangled Banner?... no... I know! Carry an egg in a spoon!"
They were about to give up when another guy was all, "Let's just have them drop to the ground and shoot stuff. We'll make 'em carry their own rifles." 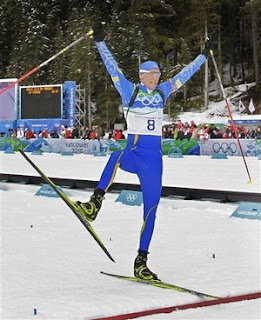 It's something straight out of Hunger Games. I'm just waiting for the Muttations to appear.
Anyone else watching? Anyone else putting off writing to watch women's hockey? I know I am.
Posted by Brodi Ashton at 8:15 AM