Books, Being a Bachelor (for the weekend) and Watching the Bachelor

You are stuck with me (Sam, the lovely husband) today. Brodi is out partying in Las Vegas like she is a 19 year old on Spring Break. I am partying at home with my boys, work, laundry, kitchen cleaning like I am a middle aged man. I don't doubt though that she has gotten a ton of writing done. I mean, when I think of getting together with fellow writers to pump out a great novel, I think, Vegas is a nice quiet town with few distractions...this will be a great place to get some work done. Who does she think she is kidding? With that said, hopefully she won lots of money and enjoyed the Thunder from Down Under.

I am assuming that most of Brodi's blog readership are big readers of YA Fiction. Though I don't read much of this genre, the books that I have read, I have enjoyed quite a bit. People often get a wrong perception of YA fiction though, thinking that it is for 10 year olds who can barely read. As you know, it is not. Brodi and I both know people that say that they won't read this genre because it is for kids...and then they talk about how much they loved the Harry Potter Books or the Hunger Games. Kinda funny.

I read a lot of adult mystery/thriller fiction type books. I am currently reading Stieg Larsson's novel 'The Girl with the Dragon Tattoo.' It is fabulous. It is thoroughly interesting, mysterious and intense. I told Brodi the other day that I really liked the girl with the dragon tattoo and that I just met her (meaning it took a little while for the book to introduce her) and she dryly responded 'I sure hope you are talking about a book and not about a girl down the street.' If you are looking to read some adult fiction and want terrific and highly entertaining books, check out the following authors: David Rosenfelt, Lee Child, David Baldacci, Harlen Coben. Nice, easy, fun Spring and Summer reads. Do you have any adult fiction favorites that you would like me to check out? I am always looking for good reads.

Now, on to the Bachelor. I have no idea what season of the Bachelor we are in, but I have never watched more than 1 episode of a season. This year, I have started to check it out and it is hillarious and awesome. I blogged about the first episode, click here . What I find so funny is that in real life, can you imagine a guy going out on a date with a girl and halfway through their '10 minute' date, he says 'I am looking for a wife.' In the real world, that girl would simply pat him on the shoulder (and probably kick him in the groin) and walk away from the guy immediately. In the Bachelor world though, if you don't tell the Bachelor how much you want to get married right this very second (and that you want kids), he will withhold a rose from you and send you walking. You have to act desperate, though not crazy desperate, in order to stay alive in the game.

The good thing about Jake the Bachelor is that he is kicking girls out with abandon. He was given a rose to give to one of two girls. Well, he decided he didn't want either so to dramatic effect, he drops the rose into the fireplace. I wanted him to scream at the rose, 'Burn baby burn!!!' But, he didn't...he just sat there looking sad and reflective on his decision. The other thing about Jake is that he is obviously comfortable with his body as his outfits usually include painted on shirts, the shirtless look, more painted on shirts and another shirtless outfit. His wardrobe is probably pretty cheap for the show: a bombers jacket and paint and they have his daily attire.

I told Brodi that if we all of a sudden got a divorce and the show's producers called me wanting a mid 30s, male metrosexual mormon, then I would say Yes. I would go on the show and have a grand old time. I would have my roses to give out and call a girl up and right when she would get there, I would apologize and say I made a mistake and that she was eliminated and then I would scream 'booyah!' I would also walk around the mansion in a speedo. And I would cry. A lot. To show the ladies how sensitive I was. I would also throw dance parties. And I would have the band Chicago come and sing while I danced with one of the ladies...oh wait, they did that this year. Which led me to wonder-- Was Air Supply too busy? What about Hall and Oats? Did they have another gig at a High School prom? Oh well, Chicago aint bad.


The Bachelor is down to just a few left. If you watch, who are your favorites still left? If you don't watch, congratulations on having a life. Here are my favorites, in order: 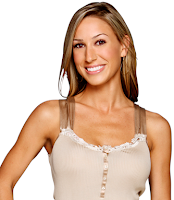 Ali--Cute as a button (not that buttons are generally cute, but if by luck, it was a cute button, it would be her) but she is obsessed with Vienna. Nobody likes Vienna. Vienna is like Iran. Hated by almost everyone. But Ali is like the United States, always talking about Iran, er, Vienna. And the United States has to turn to places like Switzerland...wait, this analogy sucks. Sorry. Anyway, Ali would rather talk about Vienna than do just about anything. If Ali could find a knife in that house, it would end up sticking out of Vienna's back. I am surprised she has not yet smothered Vienna with a pillow.
Corrie--we haven't gotten to know her as much as some of the other girls, but I dig her. She did a standup comedy routine and took no prisoners. But the show has not focused much on her so I don't think she has much life left here. 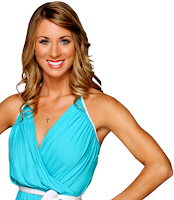 Tenley--She is a sweet girl who had her first romantic kiss since her divorce happen with Jake. It was terribly romantic. Just her and Jake and 13 television cameraman and producers in the same room. Very romantic.
Roz--oh wait, she was kicked out at the start of the season for having inappropriate relationships with one of the shows producers. Now, nobody knows what the inappropriateness was, but I am DYING to find out. I am a loyal viewer and I demand to know what happened. Tell me now! Anywho, she was gone right toward the start and she is now at home watching all of the events unfold, no doubt being very inappropriate. We love you Roz. 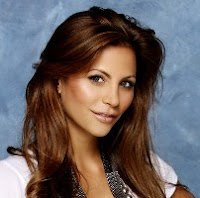 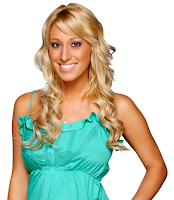 Vienna--none of the girls like her because they think she is fake. Lets be honest, they are all pretty fake...they are trying to impress a guy in a few weeks so that he falls in love. In front of Jake, they are on their best behavior. But Vienna rocks it when she is with the other girls. They hate her and it is awesome tv.
Gia--seems nice. The show also reminds us constantly that she is a swimsuit model. Its hot tub time...all the time for Jake.

That is all for today. Brodi will be back for Wednesday's post. If there are any comments on my blog post, I will respond when I can during the day. I have a job. You know, I have to help pay for Brodi's work trips. To Vegas. Have a great day y'all.
Posted by samandbrodi at 6:08 AM