The Best Part of Writing... and it's not the Homicides.

So, the here's the best part about writing. At least for me. Every so often you have a need to print your whole entire manuscript out, and I don't know what it is about seeing the book printed on actual paper, but I get all tingly inside, as if I just saw Rafa on a changeover where he has to switch shirts. 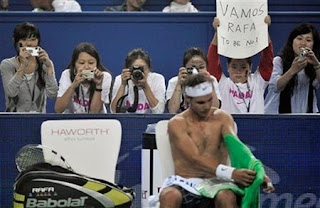 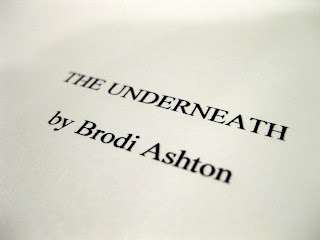 Maybe it's because in high school, I had to write a 5,000 word paper, and the assignment seemed very much the opposite of surmountable. Every word felt like it took enough energy that I could've more easily created new worlds, or squeezed a piece of coal with my pinky finger to produce a diamond. And I'd use phrases like "opposite of surmountable" instead of "insurmountable" because three words are better than one.
It would've been easier if the teacher had said, "Okay, for every word you add, someone, somewhere in the world will die." At least then I could've decreased the surplus population and been visited by three ghosts who would outline all the mistakes I'd made.
Needless to say, I titled the paper, "Eight-nine reasons why Jane Austen is so very very very very very cool, which is the opposite of lame." (Yeah, titles count toward the final word total)
So when I see this: 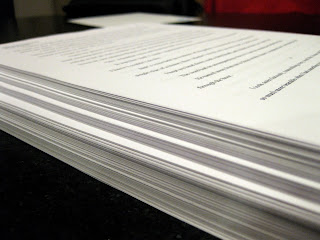 I can't help thinking, "Holy Crap. I did that. Voluntarily. Nobody died. And it's more than 5,000 words. So much more. Like 65,00 words. "
Then I have to force myself to stop thinking about it, because inevitably I'll start telling people I deserve a medal for this stack of paper with ink on it, or at least choirs of angels should be singing. I even caught Sam marveling at my work, and I captured it on video below. Watch how he lovingly thumbs through my pages:
And then he came at me with a baseball bat. I have no idea why, but I had the strangest urge to chase him, all the while yelling, "Here's Johnny!"

Okay, I'm off to cuddle with my manuscript. He just told me he's tired, so I'm going to tuck him in a fluffy quilt and sing him to sleep.

Am I the only one who feels this way?

P.S. Several trees were killed in the making of this blog post.
Posted by Brodi Ashton at 8:12 AM

Email ThisBlogThis!Share to TwitterShare to FacebookShare to Pinterest
Labels: writing