In Which we Buy a New Car... and Strange Billboards of Utah

We finally got a new car. We couldn't decide on the Bronco or the Blazer, so we compromised, because when virile Blazers meet willing Broncos (in karaoke bars) often the product of that union is a cute little thing called an International Scout. 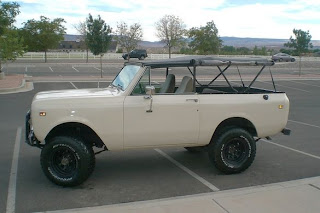 Our new little illegitimate child, Scout. Born in 1975.
Only problem was the car was in St. George. (For those of you non-Utahns, St. George is about 300 miles away from Salt Lake City).
I think there are two kinds of moms in this world. Those who would volunteer, nay, beg, to leave hubby home with the kids, drive a rental car down one night, stay in a hotel, and drive the new car back... and those who wouldn't.
I'm totally the first kind.
So I drove down Saturday night, enjoying the scenic views of Middle-Utah (sort of like Middle-Earth, but a lot less green).  And I noticed the various billboards welcoming me to various tiny Utah towns.
For instance, here's the one promoting Beaver, Utah. 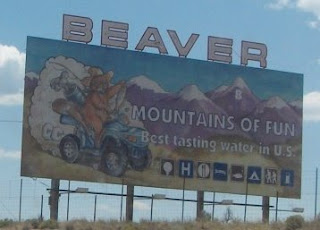 So, in case you were on the fence at the sight of a giant Beaver riding an ATV (or conversely, it might be a normal-sized beaver riding a super tiny ATV), they also throw in the fact that Beaver has the "Best tasting water in U.S."
I don't know about you, but upon reading that fact, I wanted to go use a public restroom in Beaver just so I could slurp some water from the sink, and find out what the best water in U.S. tastes like. Then I started imagining what the best water should taste like, and I thought if I were inventing water, I'd make it taste like Diet Coke. So I stopped in Beaver and bought a Diet Coke. And the signs were right... it was delicious.
I also discovered ATV's were a general theme in the Billboards. Like every city council got together, and Bob called the meeting to order, and then Phil says, "We gotta advertise something that sets us apart from the rest of these small towns."
And Joe answers, "We have a lot of open space. Dirt roads. Wasatch mountains to the East. Plains to the West.... are you thinking what I'm thinking?"
And Bob says, "ATV's!"
Only problem is, every single town along I-15 has Wasatch mountains to the East, plains to the West, and dirt roads everywhere. So every billboard shows a picture like this: 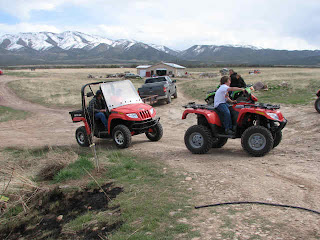 We're the ATV capitol of the world. No, we are. No, we are.
At least Parowan didn't fall into the ATV trap. Just outside of Parowan, there's a billboard that says:
Great Things are Happening in Parowan
I wanted to ask the sign-makers... have you seen Parowan? 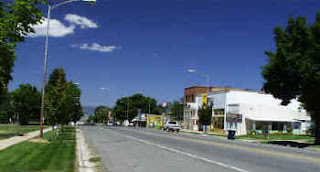 I'm all for believing anything anyone slaps on a billboard, but I couldn't help my skepticism, wondering if there really were random "great things" happening, or maybe their definition of "great" is different than mine.

This is nothing against Parowan. Maybe they were all like, "Well, everyone else is using ATV's, so..."

And the other guy was all, "You're right. Let's not tie ourselves down to one thing, like ATV's. Let's be a little more generic."


These are all things I noticed on the way down. On the way back, in our new Scout (new as in 1975) everything was loud and bumpy, so the only thing I noticed was how every car was passing me like I was standing still.

So, would you be the one taking the road trip? Or the one staying home with the kids? And what do you think of our third child, Scout?
Posted by Brodi Ashton at 8:20 AM