So, this is the post I've been dying to write!
I just signed with an agent. His name is Michael Bourret, he lives in L.A., and he's a Sagittarius. Just kidding, I don't know what he is. But I'm so excited.
The Story:
I had several full manuscripts out there. (If you query an agent with a one-page letter, and they're interested, they might ask to see the full manuscript). Then about a week ago, I got a phone call from a great agent who wanted to offer representation.
The next step (after you jump up and down and scream at the top of your lungs, to the point where the neighbors are calling the police) is to alert all the agents who have fulls, and tell them you have an offer so they have a chance to respond. Like a week or so.
The last time I did this, nobody else responded. So I was sort of expecting the same thing, even though it's a different book.
Anywho, the crazy thing is, almost every agent who had the full ended up offering representation. Pure madness.
So then I had a choice. A good choice, but a stressful choice. I lost five pounds in a week, which is weird because I made a concerted effort to only eat chocolate.
I thought, what are the things I'm looking for in an agent?
1. Someone with whom I get along with good. (Hey, I never said I was a good writer).
Problem: I spoke to every one of them on the phone. Got along great. Planned family barbecues together and trips to the coast in the summer.
2. Someone who knows his/her stuff.
Problem: They all did. They were even eloquent about it. Not a dangling participle or wandering gerund among them.
3. Someone who's passionate about the book.
Problem: They all were. They spoke of the characters as if they were actual people, which makes me feel less weird when I'm alone in my house and I'm carrying on conversations with my characters.
In the end, I had to go with my gut, and my gut was telling me to go with Michael. (Of course, it might've been all that chocolate I'd inhaled. But even if it was, I always listen to chocolate. It's just common sense.)
Michael is part of Dystel and Goderich Literary Agency, and he represents stellar authors such as Sara Zarr, Lisa McMann, James Dashner and Emily Wing Smith. 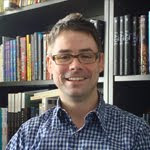 (Michael Bourret. He and his smile are available for writing conferences.)
I hope he knows what he's gotten himself into, taking me on.
Posted by Brodi Ashton at 8:39 AM