Hey y'all.
First off, I wanted to share a link to this auction to benefit Pakistan Flood victims. There are awesome ARC's and swag up for grabs. Click here to see what's on the table. Most of you know how I feel about the people in this area of the world, and I love to see people here take action to help out.
Anywho...
So, we went to James Dashner's launch party for THE SCORCH TRIALS, the second book in the Maze Runner triolgy. 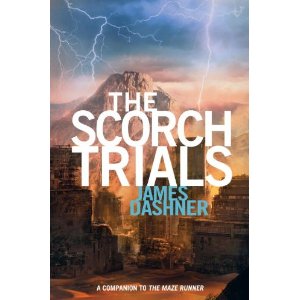 He did a great job, especially when he talked about how amazing his agent is, and I have to say, his agent sounds like a gem. (Okay, we have the same agent). 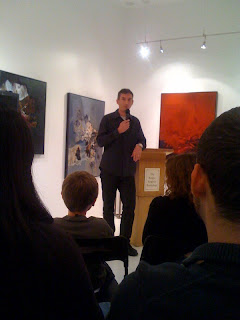 James, looking casual, talking about brain viruses.
Some highlights:
-James shared at least two secrets he "wasn't supposed to divulge*."
*He didn't use the word 'divulge'. Divulge is a very big word.
-He told the audience he did at least 20 minutes of research for THE SCORCH TRIALS. He even looked at a map.
-He said the word "fart" and then in an effort to make up for such an offense, he told the kids in the room not to say the word "fart", and by doing so, he said the word "fart" about 486 more times.
-When he met my twin nieces (niece E and niece E), he told them how lucky they were to have me as an aunt, and how even luckier they were that they weren't actually blood related to me.
-I told him where he could shove his book. (He could shove it forward on to the table in front of him, so he could sign it, of course.)
-Just to get the last word in, I gave myself a paper cut and bled on him, and then ran out the door yelling, "Now look who's blood related, beeee-yaaatch!"
I'm hoping this disturbing scene makes it into his third book, The Death Cure, since his books are chock full of disturbing scenes.
On today's agenda:
I've made progress on H-E-L-L. (btw, some of you made reference to an actual word my acronym spells out. Any similarity to an actual word is accidental.) Yesterday I finished writing a prologue for my book. Item #1 on the Revision list, check.
Now on to items 2-582.
How's all y'all's week going?
Posted by Brodi Ashton at 10:23 AM