What do Copyedits and the Pinewood Derby have in common? (Hint: They both suck)

This week, I'm experiencing two things I've never experienced before in my life.
Thing #1:
I'm getting my copyedits today.
I really like the sentence about the "Pljues dribbyng" down the street. My mom taught me to never let my pljues dribby, especially on a public street.
My editor warned me that apparently my characters "looked down" a lot in my book. And when they weren't "looking down", they were "looking" in general.
Now every time I think of my book, I picture random people wandering around, "looking". 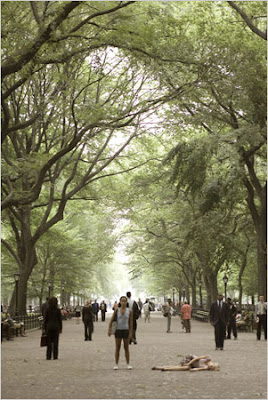 What was I thinking? I shouldn't have to point out that they're looking. Basically, if their eyes are open, they're looking. It should be a given. Give the reader a little credit, won't ya?
And when they're not "looking", they're "feeling". What a bunch of pansies.
When my copyedited manuscript arrives today, it's going straight to a time out, and it's not getting free until it can prove it only "looked" around a reasonable amount.

*by the way- shout out to the copyeditors out there. They are superhuman.
Thing #2:
There is a phenomenon out there, unfamiliar to those of us who grew up with only sisters. It is a strange event that turns men into boys and boys into sea monkeys. (I won't even tell you what happens to the sea monkeys). 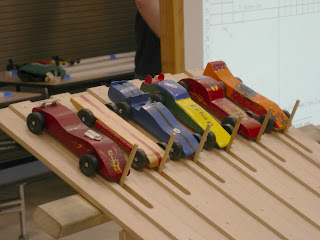 It is... The Pinewood Derby. Second in manliness only to the tiger fights in the Coliseum of ancient Rome.
I have to admit, I'm not a huge fan of the boy scouts. Their uniforms are expensive, they wear kerchiefs, and they don't have Thin Mints.
And once a year (after they take a chunk of balsa wood, drill holes in it, add weights, sand, paint, and attach wheels) they meet in the gym of the church house and test their manhood. If they don't measure up, they lose their man parts. It may sound extreme, but how else will they learn what's important in this life?
The Derby is tomorrow, so naturally Sam started on Kid C's car around midnight last night. He has exactly 24 hours make his chunk of wood look like this: 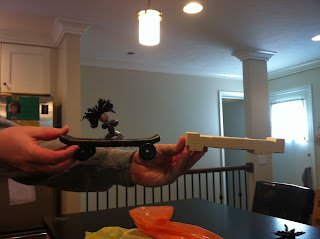 If he succeeds, Sam will earn his "Dads really do all the work, and the kids get the credit" merit badge, bumping him up to the Webelo level. (As a side note, I used to think a "webelo" was a sort of cockroach.)
Finally, here's a video of Sam, who thinks he's posing for a picture: