Shouldn't the Art of Shoe-Tying be a Natural Instinct?

I know we shouldn't have bought him all those velcro shoes.
I know I shouldn't have given up on trying to teach him the "rabbit in the tree" technique.
But seriously, he's eight years old. And this is the best he can do?
My pediatrician used to tell me - in reference to a pacifier addiction - "Don't worry about it! He'll lose it. How many first graders have you seen with a binkie?"
Does the same hold true with tying his shoes?
Will my kid be the only sixteen-year-old on the basketball court with a 3-D representation of String Theory on his foot?
Will the ref have to pause the game so Kid C's mom can rush down the stand to tie his shoes?
When is someone going to get on the ball and teach my kid how to tie his shoes?
I'm sorry... Did you just say I'm supposed to teach him?
I did not sign up for this. The thing is, I know how to tie my own shoes, but I don't know how to explain the technique except to say, "I know it when I see it."
That whole rabbit and the tree thing? I've never understood it. Bunny ears? I've never had the dexterity.
But something must be done. And it will be. When Sam gets home.
Isn't there a shoe-tying day-camp we can send him to? Why can't shoe-tying be learned from osmosis? Or just be a natural instinct?
Like they show on the nature channel. 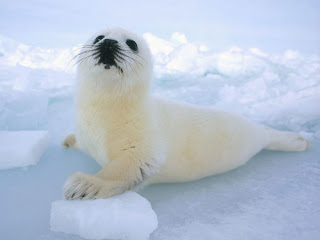 "The baby seal is only a few hours old, and yet he slides over the ice like his elder siblings. Sensing he is not alone in this world, he instinctively knows to stay near his protective mother. By tomorrow, he will be hunting alongside her. And by Thursday, he will tie his shoe."
Is my kid alone on this?
Posted by Brodi Ashton at 8:06 AM