Thing #1 and Thing #1: the Jacob and Esau of Tomato Plants, and the Hairy Beast I met

Hey y'all.
Before we get to the post, I'd like you to know EVERNEATH has a Facebook page! It's here: www.facebook.com/everneath
So, if you feel inclined, please stop on by and "like" the heck out of it. :)
And now, it's time for...
Thing #1 and Thing #1! 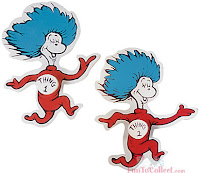 Thing #1
If tomato plants can ever be described as "crazy", this is the time.
Both of my tomato plants were planted at the same time, in similar pots, with similar soil, and equal water/sun exposure.
Yet look at them:
How does this happen?
Now, I could relate this to the publishing world (why does one story get published and another doesn't?) or the parenting world (why does one kid in the same gene pool and the same environment have issues and the other one doesn't?) but today, I'm thinking... they're just tomato plants.
Maybe there is no higher meaning.
Like any respectable ancient civilization, we took the weaker plant and sacrificed it to the gods by hurling it off a cliff, and yelling, "Only the strong survive! Viva la strong plants!"
Thing #1
This next one is indeed a THING. The other day, my cousins and I took our kids to the "This is the Place" Heritage Park.
For those of you who are unfamiliar with the vernacular, "This is the Place" Heritage Park is so named because when Brigham Young arrived in the Salt Lake Valley with the pioneers, he said, "Let's make this a really long pit stop!"
The park is a mini-pioneer village, and it is filled with mini-pioneers. It is a place stuck in time, where traditional chores are valued...
... Child Labor Laws are scarce...
... And the people are much larger than usual...
We also caught a glimpse of one of the strangest animals I've ever seen: 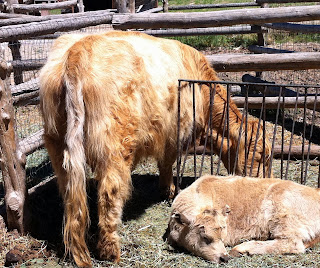 It's kind of a mix of a cow and a horse. So, it's a "Corse", of course... or a "How". Either way, it's a hairy beast.
What about y'all? Anyone doing anything fun for the holiday? Anyone know what this animal is? Anyone else worried that they've relaxed the restrictions on aerial fireworks, which basically means they've put surface-to-air missiles in the hands of thousands of 8-year-olds?
Have a great weekend!
Posted by Brodi Ashton at 8:31 AM