Kid C is on Pins and Needles... Literally. They're in his Arm.

We were five minutes away from leaving the park.
FIVE MINUTES!
When Kid C limped toward us, cradling his arm and crying.
An hour later we were at an Instacare getting x-rays:
Two hours later, we were at Primary Children's Hospital, getting more x-rays: 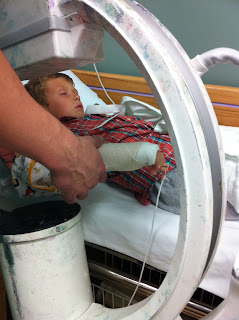 Four hours later, at about 12:30 a.m. we had the diagnosis: Type II Supracondylar Humerus Fracture. It would need immediate surgery.
And by "immediate", they meant 7:30 in the morning. Kid C was thrilled: 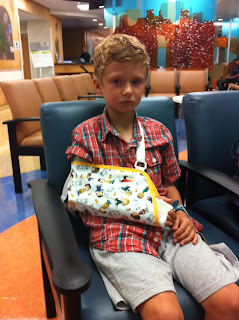 We got to have a "sleep over" at the hospital, where just for fun, the nurses would wake us up every hour to "hug his arm" (check his blood pressure), "give his hand something to drink" (adjust his IV) and "make his finger light up" (check his oxygen saturation).
It was so fun.
The next morning, Kid C got to go for a ride in his bed. In his bed! The bed had wheels. 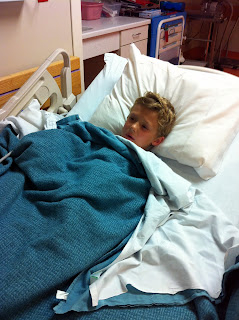 Then he went to sleep.
When he woke up, his throat was raspy and sore. Despite how many times we reminded him he had a tube down his throat, he was convinced he was getting a cold.
He kept saying, in the voice of a 60-year old smoker, "I can't believe I broke my elbow and I'm getting a cold at the same time." 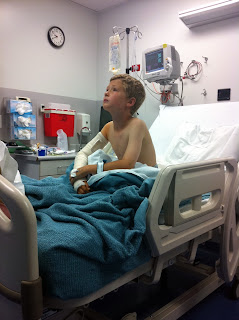 When he was done with surgery, he got to order room service. Pancakes and rootbeer slushees. He hasn't stopped talking about it since.
Some of his observations during the whole ordeal (often high on pain medication):
When Sam was trying to cheer him up: "Uh, Dad, can you say nothing?"
When Sam went to take a picture: "No pictures. Do not disturb."
Upon seeing his x-rays with the pins in his bone: "Um, what the heck is that?"
When the nurse attached a cord to his finger, and told him to "watch the monitor to see magic numbers pop up!", he said: "Ugh. This is beyond boring."
Every time a nurse or doctor went to touch his arm: "DON'T TOUCH IT! I'll move it." Wincing, he grabs the fingers of his right hand. "Okay. Where do you want it?"
Lamenting his bad fortune: "I won't be able to raise my hand. I can't even wiggle my broken bone. I can't even bow." (For all those occasions when bowing is required.)
Immediately after surgery: "I can't believe I just fell asleep all on my own. I slept through the whole thing!" and also: "You won't believe the dream I just had."
About every five minutes: "I can't believe I'm going to be left-handed from now on."
and: "I can't believe my handwriting is going to be so bad."
and: "People make chicken out of birds, right?" (I have no idea what this was in reference to...)
In reference to the $250 emergency room co-pay: "Now I know why hospitals cost so much. You get free tv, free video games, free icees, free room service, free bed. I love the hospital."
Yes, Kid C, that was the most expensive "free bed" you'll ever know.
I'm trying not to think this is some sort of karma for me because of all my complaining about deadlines. It's not, is it? Is it?!
Posted by Brodi Ashton at 2:28 PM