Lookin' For a Little Love 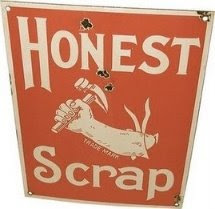 Blog friend Jenni Elyse has given me a special award: the Honest Scrap award. Upon hearing I won the award, I ripped off my clothes and ran down the street, pumping my fist in the air a la Tiger Woods. Then I found out the award doesn't come with a Tiara, and I walked back home, dejected and sagging in all the wrong places.

Here are the rules she sent along, should I choose to accept such an award: You all know how good I am at completing tasks (I think we are on month 9 of the 25 random things about me tag. I've done 15 or 16 so far.) So I'm sorta looking at the rules as a multiple choice kinda thingee.

Rule 2. Blogs I love to read: Bree Despain, Emily Wing Smith, Valynne, Eden Johnson Ellingson, Josh Berk, Debbie, Kim Reid, Cam, Sam, I feel like I'm forgetting people. Have I forgotten anyone? Leave it in the comments if I forgot you.

Rule 4. Oh Crap. Another list about me. How about I just list 10 things I learned from my weekend writer's retreat? Kay?

10 Things I Learned at Writer's Retreat:

In my absence one night, my writer's group (when asked by James Dashner, which one of us was the craziest member) voted me "Number One Crazy." To which I replied, "You Cannot be serious!"

It's not as harmless as it appears, because I was voted craziest in a writer's group. That's like being #1 Nut at the Nut House. That's bad.

I demand a recount. I mean this is coming from a group of girls, any one of whom will do crazier things than me, like:

So, one or more of the above may have been me, but otherwise that is some crazy stuff, no?

Wow. That was only number one? Okay, let's break this thing up a bit. I'll do more of what I learned at Writer's Retreat Wednesday.

How was everyone's weekend? Anyone do anything fun?

Feel free to leave a little love in the comments, preferably about something I've done that is not crazy.

Hugs and kisses.
Posted by Brodi Ashton at 8:29 AM