What I'm Reading, What I'm Writing, and a Twitter Snafu

Reading: EVERYTHING IS FINE by Ann Dee Ellis.

Halfway through and loving it.

WIP: Word Count 18,495
To keep myself motivated on my next book - heretofore known as "Work In Progress" or "WIP" - I'm going to occasionally post my word count. (You can see how I already thwarted my intentions to stay motivated by using the word "occasionally".)

If anyone else is working on a book, and you want to join me in the word count challenge, (which, again, is totally arbitrary and non-binding) please feel free to leave your own word count in the comments. Together, we can kick our own butts.

Follower status: Holding strong at 59. Would any of you lurkers out there care to make it an even 60? Anyone? I like nice round numbers, and I have to admit to a slight fear of the Primes.

Sometimes when I tweet, the page crashes and I get this little thank you note:

Something is technically wrong.

Thanks for noticing—we're going to fix it up and have things back to normal soon.
Followed by this picture: 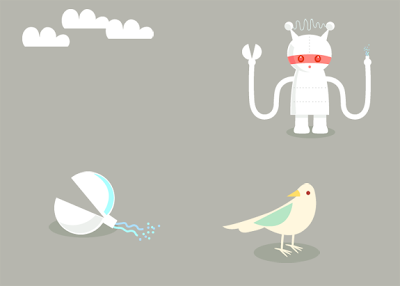 Ummm... Is this like one of those psychological Rorshach tests?

First off, the evil ninja robot's distended limbs can't possibly bring good tidings or anything. Plus one of his lobster claw hands is missing, so we know he is seriously P-O'd.

Because he lost a hand, and most likely suffered through a Freudian childhood involving an oedipal complex with his mother, he has decided the only way to make things right is to kill an innocent little bird.

With the help and guidance of the clouds above, he contructs a bomb that looks deceptively like an egg. You can only imagine what will happen after the incubation period.

So, yeah, I'd say something is "technically wrong." And morally wrong. And I'm pretty sure logistically wrong too.

When Twitter thanks me for noticing, and then shows me that picture, I can't help but wonder if I'm part of some weird global experiment to see if Twitter users are indeed smarter than a fifth grader.
Posted by Brodi Ashton at 6:11 AM