In the Event of a Zombie Attack... Get Lost in the Forest of Hands and Teeth

There's a theme to my life lately, and it seems to be about Zombies.

1. Sam gave me this t-shirt for our anniversary.

"In the event of a Zombie Attack, remember to sever the head." 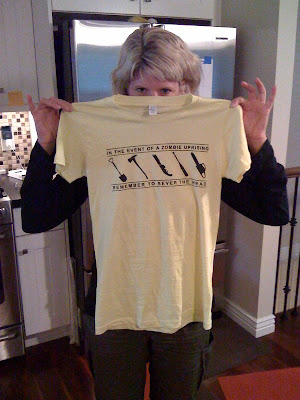 2. Sam also gave me a Kindle, and the first book I downloaded was The Forest of Hands and Teeth.

Anyone read it? It's a post-apocalyptic zombie romance. Music to my ear. Just the left one.

Anyway, the book and the Kindle sucked me in like a fat kid in Wonka's chocolate river.

I showed the Kindle to everyone and bragged about how the screen looks exactly like a book page. Like I invented it or something.

This is how I hold it when I read it.

One little bratty kid said, "That's a lot of money to spend on a computer that's designed to look like a piece of paper."

To which I replied, "You are obviously not open to the Wonka magic. Haven't you ever been sucked up a chocolate drain?"

He shook his head.

Me: "Of not getting sucked up a chocolate drain?"

Lesson learned: never get into a fight of the wits with an eight year old.

BeDazzle Me
There's just one down side to doing all my clothes shopping at Costco; the fashion there is hit and miss and I'm not hip enough to know the difference.

So, you know how like five years ago, people started wearing old school print tee shirts? Did they? I don't know. Maybe. Anyway, in my effort to de-black my wardrobe, I bought a yellow tee shirt with some sort of design on the front.

It wasn't until I stepped outside that I realized I glittered like Edward at the beach. The shirt had a million little rhinestones on it. Then I remembered that the last time I even heard the word "rhinestone" was in the 80's, usually in reference to country music, and so this couldn't be good.

To make matters worse, my younger son B has excema, and all day yesterday he would follow me around, rubbing up against my shirt. To itch his scratch. Especially on his head. Every time he walked away, there'd be a little pile of dead skin on the floor.

On top of it all, the rhinestones are in the shape of a giant bird, flapping it's wings. When I put it on, it looked like a blind bald eagle flew head first into my chest, and upon collision instantly turned sparkly as he gave up the ghost.

See what happens when you try to de-black your wardrobe? You end up with a national emblem, looking like he's hanging onto your funbags for dear life.

Today is my writing marathon, and I plan to write 2 billion words. What are y'all doin' for the fourth? I think I shall take Friday off from blogging, because Kid B needs to be potty trained. There's no better way to celebrate the birth of our country than to cover it in pee. So, you're all off the hook. Unless you have any good potty training advice.

To end with the zombie theme, enjoy the following Plants vs. Zombies music video. Give it a few tries. It will grow on you. Like a fungus. Of course, I was on Nyquill when I watched it.