Fellow Crow's Debut... and There's never an Ice Pick When You Need One

**Whoops. For those of you  coming from Bree's blog, I'll post my blogging tips on Friday. Sorry! **

Howdy.
First off, fellow Upstart Crow-ian (Upstart Crow is our literary agency) and fellow Sherpa Ted client (Ted is my agent) Josh Berk has a debut that hit book stores yesterday.
It's called The Dark Days of Hamburger Halpin, and I can't wait to read it.

It got starred reviews from Kirkus and the School Library Journal, which says: "A coming-of-age mash-up of satire, realistic fiction, mystery, and ill-fated teen romance, The Dark Days of Hamburger Halpin is a genre-bending breakthrough that teens are going to love."
Josh Berk is hands down the funniest person I know on Twitter (as in, actually know, because there are some funny people I don't know...), and if his book is anything like his personality, it's gonna be huge. He's also good at online Scrabble, and he knows his Karate Kid quotes.
He even wrote and sang a song and made a music video for his release day. You can check it out here. Stop by and tell him I sent you.
Here are some random things that are on my mind this Wednesday:
1.  I thought it would be cool, after Monday's post, if we did pretend we were up against fluffy white bunnies. And then we could get bumper stickers that said, "Kill the Fluffy White Bunnies" and tattoos and stuff and it can be a blog-wide inside joke. What say you?
Kill the
Fluffy White Bunnies
2. Anyone watch 24? Anyone else think Freddie Prince Jr. is going to spend the entire day being "five minutes out"? 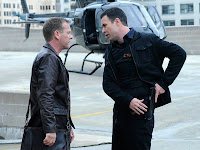 Jack: "They've got Renee. They didn't buy her cover!"
Freddie (in helicopter): "Okay, Jack. I'm five minutes out."
Jack: "Renee got her hands on an ice pick, and now all the Russians are dead. She's totally stable, though, and I might love her."
Freddie (in car): "Okay, Jack. I'm five minutes out."
Jack: "They're taking me, and I think they have torture on the mind. One guy has jumper cables with nipple attachments in his back pocket."
Freddie: "Okay, Jack. Stall for five minutes."
I think when Freddie actually arrives at a place -- any place -- the show will be over.
3. Watching Hollywood week on American Idol last night:

me (drawing parallels to getting published): "Wow. Can you imagine getting all the way to Hollywood and then going home after five minutes? I feel like that sometimes."
Sam (snorting): "You'd never get to Hollywood."
Where's an ice pick when you need one?
4. I got a musical education during my trip to Vegas.
Barry: 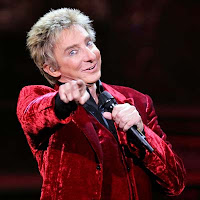 a. Did you know it's not "CoCo Cabana"... It's "Copa Cabana"?  Me neither!
b. I've never heard of Barry Manilow's most famous song "Mandy". I'm thinking my friends are messing with me, and the song is really obscure. Either way, they are ashamed of my lack of Barry knowledge.
Taylor: 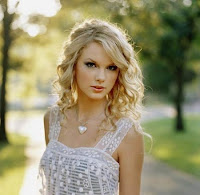 c. I heard a Taylor Swift song for the first time ever. We also watched two Taylor Swift videos.
Where's an ice pick when you need one?
Posted by Brodi Ashton at 8:27 AM