In Which a First Chapter Contest brings a new addition to our family... And Who Knew Flusher Instructions were Necessary?

Howdy.
I went to the LDS Storymakers conference last weekend. (Okay, I missed the second day of the conference, something that came back to bite me in the bum).
1. The night before the conference, I got to meet a couple of blog readers in person- Susan from Arizona and Robin from Idaho (She's the one who made me the diet coke spreadsheet). 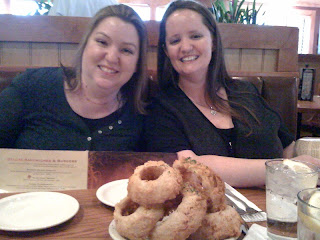 Susan and Robin
It's hard to see them behind our giant appetizers. Apparently we ordered deep fried bagels.
2. The next day, we rushed to Provo and made it just in time for Bree Despain's class on "Delving into the Paranormal." She did a great job, despite the rowdy group of hecklers on the front row. (Okay, that was us.)
3. Soccer games and tennis matches kept me from the conference on Saturday, but around 1:30 I got a bunch of texts and calls saying I'd won the grand prize for the first chapter contest. A new laptop!
They announced it in the giant ballroom at lunch time, and they're all, "The winner is... Brodi Ashton!"
Then they looked out into the audience, searching.
"Brodi Ashton?... Um, is Brodi here?"
Thankfully Valynne (#4 Crazy) stepped up to accept the prize. It worked out great, because we look so much alike. She's like my brother from another mother. 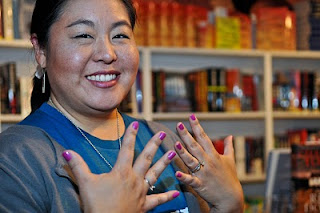 My Twin, Valynne
They started snapping pictures of Valynne with the laptop, and she's all, "But, I'm not Brodi."
To which they replied, "Then why are you trying to steal his computer? Why do you hate this 'Brodi' person? What did he ever do to you?"
But Valynne's a bouncer, so she just threw a few elbows and dashed out of there.
I have to say, I'm so excited about my new little computer. Look how small he looks next to Little Red (whom I have subsequently named "Big Red"): 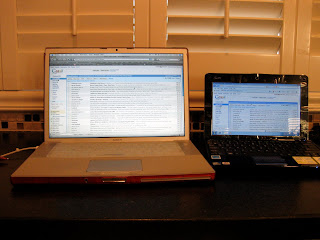 I named him Snoop and I can't wait to tote him around. The only problem is, I have man-hands, so when I type on it I feel like Chris Farley's "fat guy in a little coat" bit. 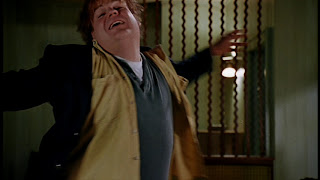 4. Aside from little Snoop, the highlight of the weekend was the restroom.
The flusher came with instructions. Up for #1. Down for #2. 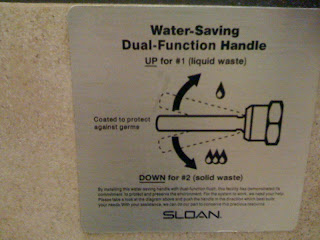