What DWTS Teaches Us About the Publishing World

Howdy.
So I watched Dancing With the Stars last night. I've never really gotten into the show before, because I like my shows to have a guy who holds a rotating power drill up to someone's thigh, all the while shouting, "Where are the Nuclear Rods?!?!" (Farewell 24).
Anywho, I watched Dancing with the Stars, or DWTS as people in the know call it, and of course, I was struck by the similarities between the dancing competition and the Publishing industry. I don't know why no one's talked about this before. (Well, probably lots of people have).
Here's what DWTS teaches us about Publishing:
1. Nobody likes an Astronaut. 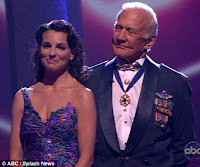 Okay, so that's not exactly true, but bear with me. Last night, Space Hero Buzz Aldrin was voted off the dance floor. Despite the producers making us feel like not voting for him would be like not voting for Apple Pie, he made an early exit.
Publishing: As much as a publisher gets behind a book, and tries to ensure a best seller, it's the quality of the dancing that will sell it. Wait. I'm mixing metaphors. But you get the drift. Nobody can force a bestseller, no matter whose feet touched moon dirt, thus beating those Ruskies. Who knows why some books flounder while others catch on like fire. Nobody can predict it. But if the love isn't there, you can't force it.
2. America hates the Space Program.
Well done, America, voting our hero off. You've just killed the Space Program. Now the Ruskies have the power.
Just kidding. This is what I wanted Buzz to shout during elimination. I thought it would be cool, followed by security forcing him off the stage while he laments, "Why do y'all hate Spaaaaaaaace?"
3. Running after Eight kids Doesn't Make you Light on Your Feet.
I don't know if you knew this, but Kate G. has eight kids. and the paparazzi follows them like moths to the flame. Heartless weenies. Kate never wanted to be in the spotlight. She did dancing with the Stars to take a stand against fame, and tell the world, just because you have a reality show, it doesn't mean you can act.
Show me anger, Kate: 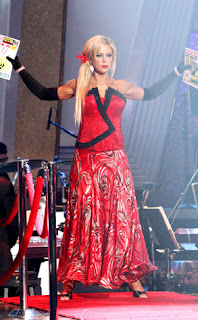 Keep flapping, Kate. You're not going to fly away. 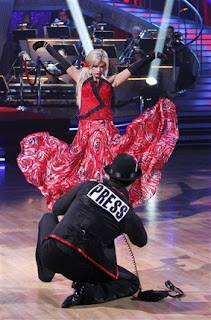 Publishing: When it comes right down to it, it's the writing (dancing) that matters. And there is such a thing as talking about your kids (books) too much. You kids (books) are never as cute to everyone else as they are to you.
4. The people who love... um... these: 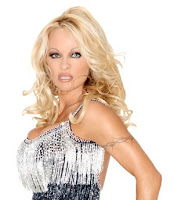 Aren't the ones who know how to use this:

Now, if people voted by going to a bar and chugging each time she licked her teeth, she'd be the front runner.
For publishing: Know your target audience. Know exactly where it will fit on the book shelves. Know how large your audience would be, and why they would buy your book. If you can't figure this out, Publishers won't be able to either.
5. Doesn't matter how cute your dance is. If you don't follow the rules, you don't stand a chance. 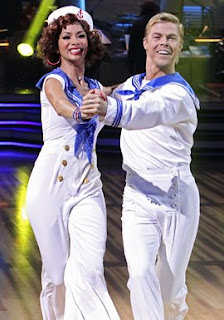 These two (okay, I'm not good with everyone's names) did an awesome dance, but apparently they broke some cardinal rules of the shuffle. I had a tough time understanding just what the rules were, but here's what I gleaned:
a. They dipped when they should've squatted
b. They strutted when they should've shimmied.
c. Their costumes weren't historically accurate. Everyone knows sailors show a little more skin.
Publishing: You can write a great book, but if you don't follow the rules of querying and submission guidelines, no one will ever read it, and the dance scores won't count. So don't let something like a shimmy keep you out.
Okay, y'all. Keep shimmying. Anyone else watching dancing with the stars? Who's your most annoying contestant?
Posted by Brodi Ashton at 10:18 AM