Hey y'all.
I reached a milestone today.
1500 solitaire games won on my iPhone. 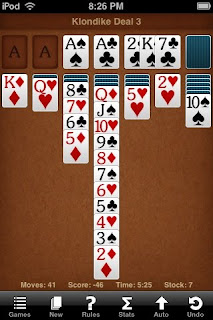 Amazing, right? I know what you're thinking: "Is there an award for such a feat?" And then you're probably thinking "Is it "feat"? or "feet"?" At least, that's what I would be thinking.
It's not like it was easy, although I do have a fairly high win percentage at around 16.0%.  (Don't anyone do the math. Okay, fine! It was 9,425 total games played.)
In my head, little tiny announcers are remarking on my moves, and questioning whether the big risks I take will be worth it.
ex: "That's a lot of empty spaces. Ashton better hope she's got some Kings in that deck, or there could be trouble." and then the other guy says, "What a time to take chances!" because there's a million imaginary bucks on the line. 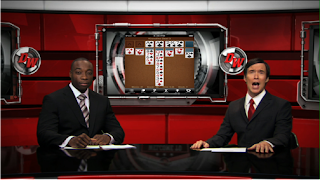 (Solitaire play-by-play: The most coveted position in sports)
People have asked me before how I have time to blog thee days a week and write a book. Imagine what they'd think if they knew I've almost played 10,000 solitaire games as well. Which, I guess, now they do know.
So, here's the answer. (And if you're interested in any sort of writing career, this is a good thing to know):
Waiting becomes a way of life, and you have to find a way to cope.
Obviously, the best way to spend that waiting time is by writing your next project. I've done that before. But there are certain times on the path to publication where you have to wait, and your brain can't function enough to write.
This week has been a series of spurts and stops, and I have a severe case of whiplash. And it feels delicious. And now I'm waiting again.
I can't wait to tell y'all about it. (Okay, I guess I just did.) In the meantime, raise a glass: To friends old and new, who love Diet Coke as much as I do.
I love all of my blog readers, but especially you. And you.
So, what do y'all do to pass the time? Can anyone share some internet word games, or something? I'm lookng to diversify.

And what's everyone doing this weekend?
Posted by Brodi Ashton at 8:01 AM