Happy Monday y'all.
Thanks for all the entries in the "Help Brodi Express her Feelings" contest. I learned a lot from the comments. For instance, emotions often lead to gastrointestinal issues.
And the random winner of the signed copy of PARANORMALCY, chosen by the Random Number Generator, is...
Rebecca!
Please email me your address at: brodiashton (at) gmail (dot) com.
As an added prize, I will use the emotions you gave me somewhere in my book. I don't know if you'll consider that a prize, but I think it's pretty cool.
Moving on...
Sam and I went to an 80's Prom Party over the weekend. 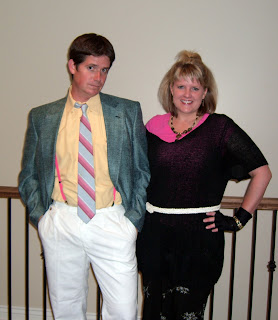 Me and Sam: When he said he was going in "Tighty Whities",  I was hoping he meant something else.
In anticipation of the event, we had to search for 80's clothes.
We went from Denial: "There's no way we're dressing up."
to Anger: "Who actually plans to revisit the 80's? Even the 80's knows it should stay dead. It was the 80's that took its own life in the early 90's, when it felt useless and unloved."
to Bargaining: "I'll tease my bangs if you wear the pink suspenders you wore last night..."
to Depression: "I swear it wasn't that long ago that these stirrup pants used to fit..."
and finally to acceptance: "Molly Ringwald would've killed for this outfit! It's okay to cut the fingers off my Isotoner* gloves, isn't it?"
*Side note: My mom gives me a pair of Isotoner gloves every year for Christmas. I have boxes and boxes of them, unopened, in all sorts of colors. Every year, when I unwrap the gloves, I say, "Thanks! I totally needed these!" And then they go to the dedicated "Isotoner Glove Drawer" in my dresser.
**Side note to the side note: It's okay I told that story, my mom doesn't read my blog.
At the party, I sang karaoke with my writer peep Valynne (#4 crazy). During the musical interlude, I showed off the move that got me countless wrist corsages in high school. 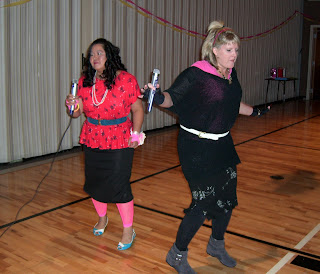 Here's a shot with my writer's group, The SIX, and I'm sure y'all recognize the man in the middle. (Rick Springfield). 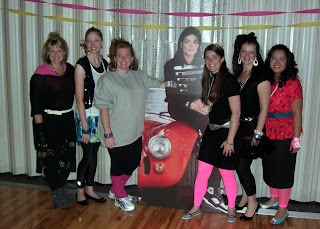 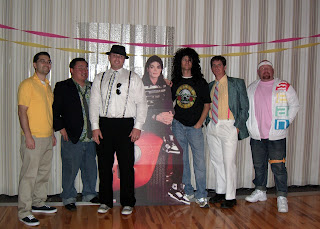 Stand back, ladies. They're taken. Unless you really want them. Then we're open to negotiations.
The men did an awesome rendition of "Turn Around Bright Eyes," and rumor has it there's video evidence of the performance. I'm hoping to unearth it for Wednesday's blog.
How was all y'all's weekend?
Posted by Brodi Ashton at 10:32 AM

Email ThisBlogThis!Share to TwitterShare to FacebookShare to Pinterest
Labels: random, the six