Here's to Kneeing Cancer in the Groin

Hey y'all.
So, I'm a little late to post today, because I've been waiting on some news about my dad... and the news is good!
My parents flew down to Houston to MD Anderson for his first CT scans since his diagnosis- to see if the chemo had any effect on the tumors in his lungs.
The scans showed that the largest tumor had shrunk by half. The other smaller tumors had shrunk as well, some appearing only as little shadows. (side note: the words "had shrunk" never sound right. Never ever.)
The doctor's computer crashed several times as they were comparing the results, and he said, "I think the computer isn't accustomed to such positive results. We don't normally get those."
He speaks the truth.
We are ecstatic. I have finally emerged from the fetal position I first assumed on Monday. We are blessed.
Of course we know we are not out of the woods. The woods are infinite in cases of pancreatic cancer. But, as Martha Stewart would say, holy crap, Batman, this is a good thing!
I will leave you all with a picture of my dad's grandkids at his clinic. They all went together to get their immunization shots. I don't know why I found it so cute. Maybe it's because they looked so happy even though they knew what was coming. 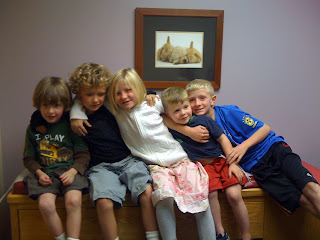 Here's to all of us looking that happy in the face of pain!
Love to you all.
Bro
Posted by Brodi Ashton at 11:19 AM