Why Novel Writers Should Never Write Lyrics... and the Real Story Behind Copacabana

So, we had our first band practice of the Barely Manilows yesterday. Because we're performing at Emily Wing Smith's launch party tomorrow, and we didn't want to wait until the last minute.
We also wrote new lyrics. I have since decided that writers of novels should never write lyrics. We get caught up in the mechanics. Here are some of the questions we asked while we were writing:
"I know this line makes for a good rhyme, but we haven't properly set up the character's motivation for the action."
"We can't put this here. It's chronologically inconsistent!"
"Too much description!"
"Did you really just try to sneak that -ly adverb in there?"
"Boyfriendless is not a word!"
"This line is, like, the definition of telling and not showing."
I have to say, the original lyrics have their fair share of telling, not showing. 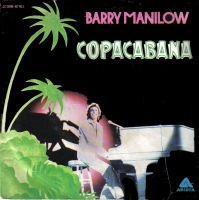 Her name was Lola, she was a showgirl
With yellow feathers in her hair and a dress cut down to there
She would merengue and do the cha-cha
And while she tried to be a star, Tony always tended bar
Across a crowded floor, they worked from 8 till 4
They were young and they had each other
Who could ask for more?
At the Copa (CO!), Copacabana (Copacabana)
The hottest spot north of Havana (here)
At the Copa (CO!), Copacabana
Music and passion were always the fashion
At the Copa....they fell in love
If I were writing the lyrics, I would've gone with something like this:
"Lola!" The manager had to shout to be heard above the warm-up band. "You're up next!"
"Coming!" Lola called from the dressing room. She glanced in the mirror, pulled her dress down to there and then turned to the girl standing in front of the adjacent mirror. "Hey, Mona. Do you think these yellow feathers in my hair are a bit much?"
The girl studied Lola, tilting her head. "I'm not sure. What are you dancing tonight?"
Lola groaned. "The merengue and the cha-cha. Again."
"Girlfriend, you'll never be a star if you don't switch it up now and then." With that, Mona whipped around - the ruffles from her dress grazing Lola's bare thighs - and exited the room with a flourish.
Lola sighed. I'll be a star in Tony's eyes.
She straightened the feathers in her hair, pulled her dress slightly past there, and made her way through the throng of dancers coming back from their number.
"Hey Lola!" a red-headed dancer said. "Look for the guy in the front row, with the diamond nestled in his hairy chest. He's fast with the tips. And I think he's packing heat!"
"I only have eyes for Tony," Lola responded, despite the thrill of a gun, and the promise of chest hair.
As she stepped out into the club, she looked across the crowded dance floor, to where Tony was wiping down the bar.
He'll make such a good husband, she thought. Provided his temper doesn't get him shot one day. (Foreshadowing. Zing!)
As if he felt her gaze he raised his head, his eyes meeting hers. She pointed to her wrist, and mouthed the words, what time are you off?
He raised four fingers. She should've known. He always worked from eight to four. So late. At least they were young and they had each other. What could go wrong?
She adjusted her dress again - it was always riding up above there - and then she wiped a fresh sheen of sweat off her forehead as she took her place in front of the band.
"It's hot in here tonight," the trumpet player Mark said from behind her.
"I know!" Lola said. "Where are we... Havana or something?"
"Nope. Just north of Havana."
Then: The Chorus.
Sure, the words don't really fit with the music. But isn't that the mark of a true musician? Someone who can write music to fit these words
Fellow band member Valynne made us these band costumes: 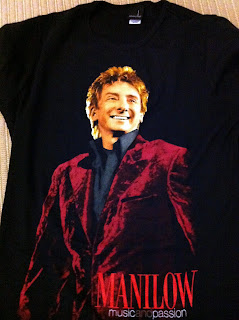 I'm not saying the t-shirt company's claim that they are "one-size fits all" is a vicious lie, but I will say Barry's face looks even more distorted than usual when I wear it.
And, is it meant to be a crop top?
Emily's launch is tomorrow night at the King's English at 7:00. Let's party. Who's with me? And are there any Barry fans out there?
Posted by Brodi Ashton at 7:47 AM