I Warned Her Not To Leave Her Kid with Me, But Did She Listen? No...

Okay, so it looks like most of you approve of the new blog colors, or maybe you're just being nice. Or maybe those of you who hate the new colors just didn't say anything...
I think the new colors are a little girly, and a smidge on the confectionary side, but they don't make me itch. Yet.
Anywho, I was reading over my post from Monday, and I realized that I put the same picture in twice. I don't know why I did this, and furthermore, I don't know why I didn't notice. I had like 85 pictures to choose from, most of higher quality than the one I actually posted (twice). Maybe I liked how everyone looked a little orange. Here it is again, in all it's glory. 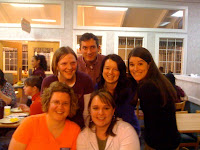 Oh well. Also, I realized that some of you are into the blogging/authoring scene in and around Utah, and yet didn't hear about the blogger/author event. Everyone is invited to these things, so if you're into that sorta scene (which makes it sound like it's a party scene, like a rave, where we all walk around with pacifiers in our mouths, but it's not... It's like the opposite of a rave... In fact, it's downright geeky) then let Natasha Maw over at Maw Books Blog know.
Natasha's like the social director of the book blogger scene. She hands out the pacifiers. She's really nice and not intimidating at all, even if she is married to a One-Eyed Sword-Wielding Duke. 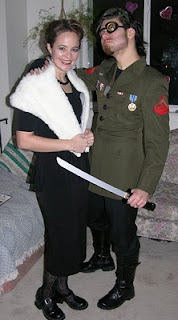 (Okay, so they look a little intimidating in this pic I stole from her blog, but I read the post and she assured readers they didn't kill anyone)
You know how it is when you're not in Kid Mode...
So, Cousin W was in from back east, and our cousin group decided to meet up at the Dinosaur museum. Everyone brought kids except me, because the dinosaur museum stresses me out enough without kids and I wanted the chance to catch up with Cousin W. 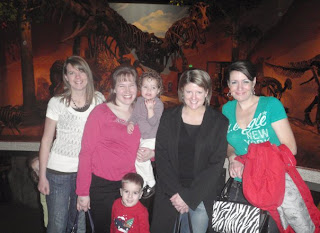 (Cousin K, Cousin A with her two kids, me, and Cousin W)
At one point, Cousin A had to go meet Cousin K in the lobby, so she's all, "Brodi, watch my kids while I go get Cousin K."
I'm all: "Um, No! I'm not in kid mode! That part of the brain has shut down! It's not a good idea!"
But Cousin A had already run out of the Bone room, leaving me with her two small kids. (The room with the dinosaur bones.) Oh well, I figured. What's the worst that could happen?
I snatched up her littlest kid and then picked up my conversation with Cousin W. A few minutes later, I turned to check on the older kid, Jackson. (Maybe four years old?)
He was gone. Like, gone, gone.
The Dinosaur Museum is huge, with lots of twists and turns. We happened to be in the "Nook and Cranny" room (which, if you're gonna lose a kid, you don't want to do it in the nook and cranny room) so I hurried and checked all of the nooks and crannies. No Jackson.
I started running, following the switchbacks of the pathway, all the while yelling out "Jackson!"
You know how you can recognize your own kid from behind, but when it comes to someone else's kid, they all look the same from behind? I'm not alone on this, right?
Well, the museum was extra crowded that day, and there were hundreds of kids Jackson's height (2 and a half, three feet) and they all had Jackson's hair cut. So not only was I yelling his name, I was yanking random kids and jerking them around to see their faces.
Yeah, this is the point where other adults start yelling at me, and I'm all, "Shut up! How am I supposed to know what the missing kid looks like from behind?"
And their expressions said, "You don't know your own kid?"
And I'm all, "He's not my kid!" And the other kid I'm holding in my arms is screaming at me, saying, "You're not my Mommy! I want my Mommy!"
And their smug faces said, "Security!"
Finally, Cousin A found us. Jackson was with her. He'd gone out of the museum part into the lobby to find his mom. 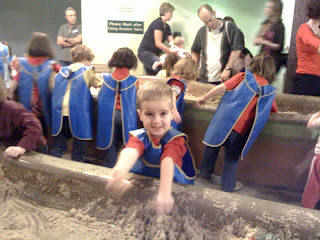 (Here he is, plotting his next great escape, and then on to world destruction)
I gave him a good scolding, and promptly blamed his disappearance on a history of bad parenting. Just kidding. it was totally my fault, Cousin A.
But I did warn her, that part of my brain was under construction. Y'all know what I mean, right?
Posted by Brodi Ashton at 8:18 AM