Observations from the Author Photo Shoot: There is a right and a wrong way to wear Spanx.

Hey y'all. Here's a report from my photo shoot:
1. Park City is cold in January.
We took the photos on Main Street in Park City, because that's where much of my book takes place. 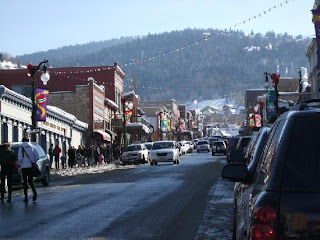 Not only is it cold, but there are a lot of skiers who roam the streets, so no matter where we went, we had an audience. Most of the people watching had a visible little thought bubble above their heads that said:
Is she supposed to be someone famous?
and...
How can someone with such big cheeks be famous?

I think this is because the Sundance Film Festival is coming up. I wanted to tell them, "I'm no one. I actually paid this poor girl to take my picture."
And... it was cold.
2.  It doesn't matter how many cute outfits you pick out. If you're stupid enough to get your pictures taken in Park City in the winter, you have just one outfit. A coat. 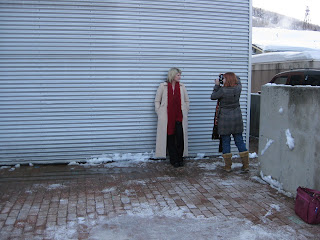 That's me in the white coat, and I don't know who that other person is. Often when I casually lean against a metal wall, someone inevitably shows up with a camera. 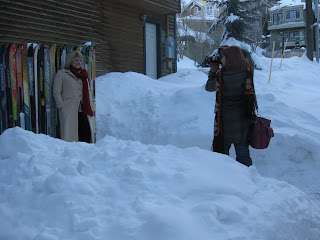 Of course I'm kidding. That's really my awesome photographer Opie, and she did a great job of telling me when to smile big and when to look serious.
I brought several outfits to the shoot, and when Opie saw them, she said, "Um... those are all five different versions of the same outfit" because I only ever wear black ONLY EVER and I never wear color NEVER EVER.
Thankfully, my mom had the foresight to bring along a red scarf. Remember the one I was making fun of?
3. If you're going to wear spanx, make sure you wear them correctly.
I decided to give spanx a try. They were the kind you wear under a shirt, and they're supposed to cover everything but... um... the sisters. Unfortunately, I didn't know this. I accidentally put it on backward, like a swimsuit, so that it was completely smashing everything on my chest (which isn't necessarily a bad thing).
When I looked in the mirror, I was flat as a pancake. Then I turned around to discover I had an awesome rack (with cleavage) coming out my back. It looked like someone had put my head on backward.
Thankfully, the Nordstrom girl came in and pointed out the error of my ways, all the while trying to stifle a giggle.
But, for one shining moment... I was flat. From a certain angle.
4. I got a few pics with my honey. (No, not Rafa. The other honey.) 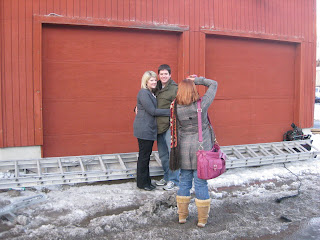 5. I got a sneak peek of my photos in an online gallery, and I'm amazed at what miracles a professional photographer can pull off. I can't wait to show y'all!
Posted by Brodi Ashton at 10:46 AM