My Trip to Hurkin, A Woman from Hungary was Hungry, and the Best way to Kill a Red Ant


Yes, you read that right, but there's a very good reason. I forgot to tell you all that the day after I started the Chimichanga Challenge with Bree Despain, I went on a family vacation. So, the first five days are going to be rough.


By the way, the seven words I wrote were: "She wakes up and senses a problem." Are you totally intrigued? What problem would she immediately sense? Had she been snoring?


So, I'm out of town in beautiful Hurricane, Utah. (pronounced You-Taw.) Oh, and for those of you not from Utah, "Hurricane" is not pronounced "Hurr-ih-cane." It's pronounced "Hur-Kin". No Foolin'. It's one of those Utah quirks.


Hurricane is one of the towns near Zions National Park. We paid $20 dollars to get in, to see scenes like this: 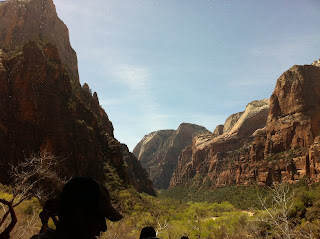 but really we spent the day doing this:

About five minutes into our hike, the kids saw a pile of sand, and 3 hours later we were still there. What is it with kids and sand? Makes me think I should've remodeled our house with sand. It would've saved us a lot of money and provided an endless source of entertainment. Vacuuming would be a thing of the past.


The only problem would be the red ants. You know what happens to red ants when you stomp on them in the sand? ABSOLUTELY NOTHING! Smothering them in sand doesn't work either. The only thing you can really do is wet the sand under them and then stomp on them, so the wet sand creates a hard surface.


This technique took me about 3 hours to perfect... after which Kid C, with tears in his eyes, informed me red ants have families too.


I distracted him by throwing sand in his eyes. Then he was crying for a different reason. A better one.

Kid C was excited to learn that many of the tourists at the park came from different countries. He started asking people where they were from. He got answers like Australia and Jordan, but he was confused when he asked an older woman - who didn't know any english - where she was from.


Because speaking loudly and slowly is the universal language.


Thinking the boy answered "How are you feeling right now," and not "Where are you from", kid C just looked at me and shook his head. He was lost in translation. He gave up.


Blogging will be sporadic this week, as I have discovered that Wi-Fi is not one of the naturally occurring elements in Zion National Park. I still don't understand how it is not universally available.


How's all y'all's week going? Is it Spring Break for anyone else? Anyone going topless in Cancun?
Posted by Brodi Ashton at 6:27 PM