How was all y'all's New Years? Good? 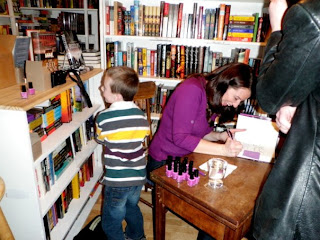 She did a fabulous job, and I think she may have secured herself a place as #1 crazy in our writing group when she showed the crowd her revision process, involving roughly 465 color-coded tabs and highlights, each color representing a different aspect of writing. Seriously, we should vote now. (Added: Thanks to Melissa for the pic) 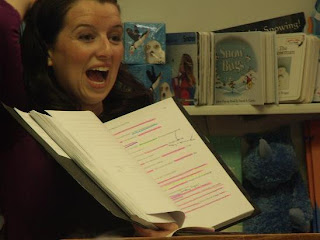 All in favor of Bree for #1 Crazy? Aye! (In the pic above, she's raising her hand too.)

Bree packed the house, and the bookstore sold out. I've never seen that happen. 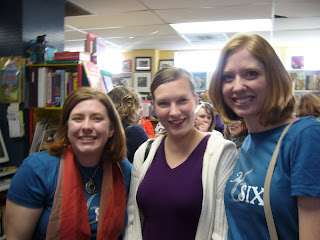 (Sara B. and Kim R., modeling the new shirts with Sarah W.)

I went into the back room of the bookstore to change, and when I finally squeezed myself in (using a shoe horn and a nearby oil slick), I realized what Valynne meant by "they run a little small". 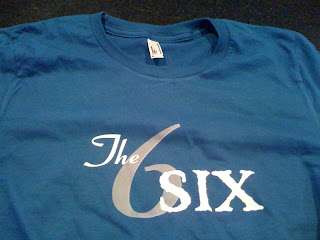 I looked at myself in the mirror, and I could read the make and model of my bra.

So I put a v-neck black shirt over the t-shirt. But I still wanted to feel a part of my critique group, so I pulled down at the "v" and flashed everyone wherever possible.

Not only was it gratuitously tight, but I made it worse by looking like a flasher.

After I flashed Matt Kirby, he said, "Brodi, you have turned awkward moments into an art form." 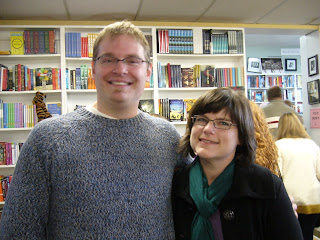 Emily Wing Smith kept saying the shirts "amplify our ample racks" or something to that effect, which meant she owed a lot of quarters to the "Booby Jar". (Every time someone mentions boobies, or refers to them, that person must donate a quarter to the jar. To give you an idea of how much we talk about them, we're planning on the jar financing a group cruise.)

I met a lot of blog readers in person, so thank you to all of you who came!

Here are Ben Ballou, Cam Ballou, me (in my v-neck, in a rare moment of non-flashing) and Heather Zahn Gardner. Ben, Heather and I went to Junior High school together. 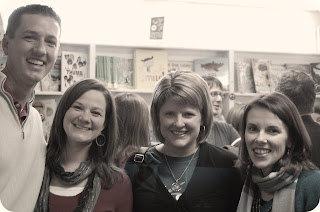 I also got to reunite with my class from the BYU writing conference over the summer. I felt like there were so many familiar faces, I sorta grew accustomed to introducing people, culminating in this moment:

Elana: "Um, Brodi, Kim and I have been in the same critique group for years."

Elana: "Years ago. In our critique group."

Finally, blog reader Robin (who lurrrves spreadsheets) sent me a custom made spreadsheet to document my Diet Coke intake in 2010. Isn't that nice? I was trying to explain it to my family, and I was all, "It's got like, a bunch of columns, and a bunch of rows, and I put in a number and it magically gives me another number. It's in a program called Ex-ell. Exx... celll... or something."

I told them I wanted to show it on the blog but I had no idea how. My bro-in-law D says, "Lemme guess. You took a picture with your iPhone." 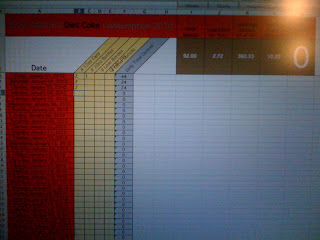 How did he know?

Do you see the awesomeness that is the spreadsheet? Can you imagine the depression at the end of this year if I'm vigilant and record every diet coke?  The last column should read "percent chance that your skin will fall off due to over consumption".

How was everyone's New Year? Do your kids start school today like mine? Are you jumping for joy too?